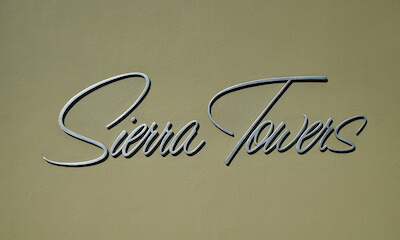 Designed by renowned architect Jack Charney and completed in 1965, Sierra Towers has long had the clout of being the luxury condo building in Los Angeles. The timeless appeal of the high-rise building results from the perfect combination of location, views, a discreet staff, and celebrity residents. Whether you are looking for a pied-à-terre or primary residence, Sierra Towers is the perfect fit for any lifestyle choice.

Below you will find the latest condo listings in Sierra Towers, updated every few minutes from the largest West Hollywood MLS. Register to get alerts when new units come on the market. For additional local inventory, view all West Hollywood condos.

Sierra Towers is a 31-story building located at 9255 Doheny Road near the intersection of Sunset Boulevard and Doheny Road. It sits in the 90069 zip code of West Hollywood.

With its location on the border of Beverly Hills and West Hollywood, right off the Sunset Strip, residents find the best shopping, entertainment, and dining within close proximity while enjoying views usually reserved for those homes near the top of the Santa Monica Mountains.

Designed by architect Jack A. Charney, who studied under Richard Neutra and Rudolf Schindler, the 146-unit building was built in 1965 for $12 million by developers Walter and Leo Minskoff as an apartment complex named the Spoon Apartment Building. In an interview with the Los Angeles Times, Charney said his intention was "to take maximum advantage of views of the city, mountains, and ocean," which can be seen in his design and the use of floor-to-ceiling windows and expansive terraces. 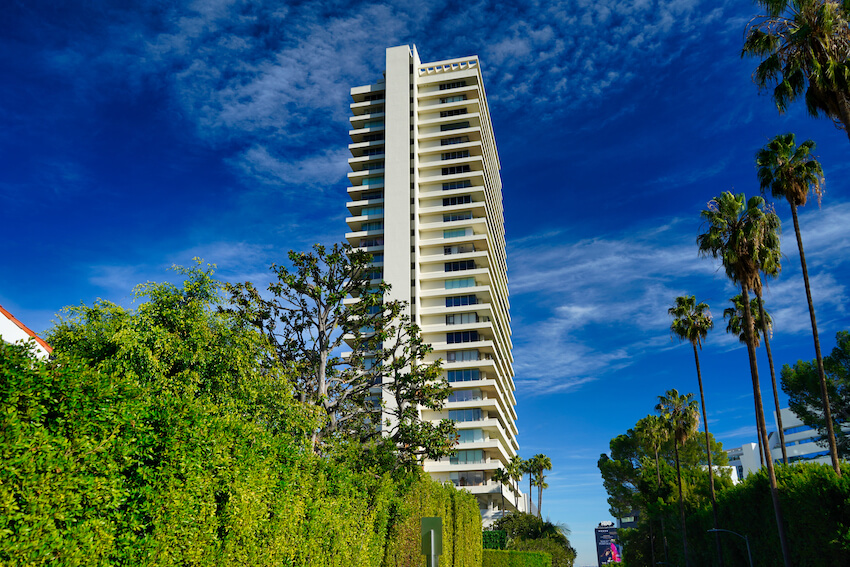 The views are one of the biggest draws of the iconic building and increase both demand and sale prices in part because the Sierra Towers building cannot be replicated under current zoning restrictions. In fact, Sierra Towers is the tallest building (by 15 stories) within a two-mile radius and also holds the distinction of being the tallest residential building in Los Angeles when measured by altitude in relation to sea level because its 31 stories are combined with its elevation on the foothills of the Santa Monica Mountains.

Sierra Towers was converted to condos after real estate investor Helmsley Spear Inc. bought the building in 1974. Residents of the building are supported by a staff of 37, including security personnel, porters, and 11 valets; the Sierra Towers staff has a reputation for outstanding service and discretion.

Sierra Towers is followed by as many rumors as some of its famous residents. Some of those rumors include:

Notable and Celebrity Residents of Sierra Towers (Past and Present):