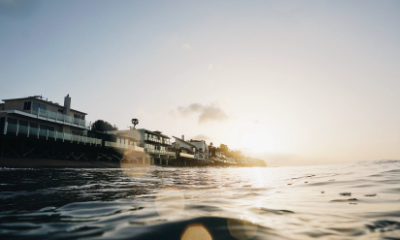 Search all Malibu Beach houses for sale. Malibu hugs 21 miles of Pacific Ocean shoreline in Los Angeles County. Malibu real estate ranges from waterfront bungalows to grand historic estates. The oceanfront property in Malibu is in high demand due to Malibu's promise of beach living within a short drive to the Westside of Los Angeles.

With the limited supply of beachfront property in Malibu, this land is some of the most exclusive property found not only in Los Angeles, but in the entire United States. The listings displayed below only show shoreline properties west of the PCH, but you can also peruse all Malibu real estate, including hillside homes that overlook the ocean.

Although the wet sand is considered public property in California, beachfront property includes the dry sand down to the tidelands, defined as the area below the mean high tide line. So the general rule is wet sand is public and dry sand (if part of a privately owned parcel) is private.

Malilbu beaches have been used as shooting locations for numerous films since the early days of the motion picture industry. The area's stature grew immensely during the 1950s and 1960s with the rise of surf and youth-themed movies like Beach Blanket Bingo. Iconis scenes in the Planet of the Apes series were filmed at Point Dume. For an entire summer during filming of the eponymous first film in the series, a scale replica of the Statue of Liberty from the famous closing scene lay buried at the Southern end of Pirate's Cove.