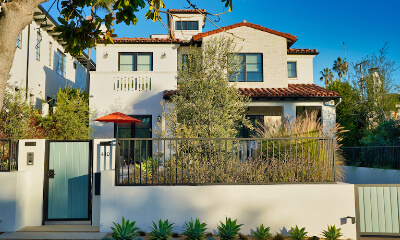 People prize Spanish homes for their warm colors, rich detail, rustic charm and earthy vibe. These core characteristics create a timeless appeal. Inspired by the homes of Spain and Latin America, Spanish-style houses can easily be identified by a few key features like low-pitched roofs, asymmetrical façades, prominent arches over doorways and the lack of overhanging eaves.

They can be found all over L.A. County, in virtually every neighborhood from Malibu to Pomona and all points in between, including some very large mansions in Beverly Hills and luxury homes in the Hollywood Hills.

During the 16th century, Spanish monarchs set guidelines for city planning in their New World territories. That’s why there are so many well-preserved Spanish Colonial buildings in Brazil, the United States, and the Philippines. What’s more, Mexico tops the list of Spanish Colonial UNESCO World Heritage sites.

The influence and spread of Spanish architecture began with royal ordinances that came from Spanish monarchs. Their guidelines set the position and layout of cities as well as architectural standards such as space for horses, adequate consideration for the health of dwellers, and that homes be positioned in a way that the city could be defended.

At the time, the principal buildings of a developed city were its missions and churches, always with their iconic bell towers. The mendicant orders of Franciscans, Dominicans, and Augustinians simply built churches over the sites of prehispanic temples.

Jesuits had a tougher task as they ventured far beyond the existing cities of Mexico. Before erecting Mission churches on the new frontier, they were first faced with the task of building complexes to support their evangelical duties. These outposts had to be far more utilitarian in their purpose. Digging wells and erecting workshops and building living quarters were essential to survive in Northern Mexico, the territory that what would eventually become the Southwest United States. Once the essentials for living were in place, churches could then be erected.

In the waning years of the 19th century, the Eclectic Movement emerged; a kaleidoscope of architectural styles that romanticized the past. You may recognize a few styles from the period like Tudor Revival, Beaux Arts, and Colonial Revival. For designers involved with creating Revival style buildings, authenticity and stylistic accuracy were considered paramount to their task. Architects of the Revival Period (1880-1940) had one foot in the past and one in the future.

Spanish Colonial Revival homes took hold in Southern California after the Panama-California Exposition in 1915 where Bertram Goodhue’s exhibits brought Spanish-influenced architecture to the masses; it was no longer solely the domain of the affluent or for application to large civic buildings.

After the national exposure of the style gained at the Exposition, Spanish Colonial Revival designs came to middle-class neighborhoods everywhere, particularly in Southern California, gaining their height of popularity in the 1920s. Spanish Colonial Revival architecture includes the sub-genres, Pueblo Revival and Santa Fe, the latter of which began in the 1890s and reached its zenith in the 1920s and 1930s.

Then, as the economic realities of the Great Depression tapped the brakes on new construction activity around the world, consumers' enthusiasm for fanciful homes also fell by the wayside. Times were bleak.

Construction and appreciation of Spanish style homes never completely went away. There are plenty of well-preserved originals around, and new homes of the genre are routinely built across Los Angeles County.

How do you tell the difference between a Spanish and Mediterranean Home? The differences are subtle, but here are a few markers:

It is hardest to identify the differences between the Spanish and Mediterranean architectural styles when the two essentially merge into one, Spanish Mediterranean. Here’s a cheeky explanation:

A: A Spanish-style home near the sea.

Search all Architectural Styles in L.A.