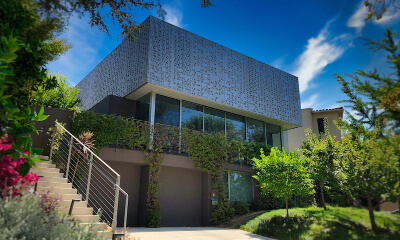 Modern and Mid Century Modern architectural styles were born from Modernism. Designers and artists in the movement sought to bring homeowners closer to nature through simplicity and lots of natural light. Architects made modern style available to the masses during the postwar period when the world was undoubtedly becoming more technologically advanced.

Modern homes can be found all over Los Angeles. You can find modest tract homes built between 1945 and 1960 in the flats section of Burbank. Larger and more expensive Mid Century Modern homes dot affluent areas like the Hollywood Hills.You can register for a free account and receive email alerts whenever new Los Angeles Modern homes come on the market.

Modernism is a philosophical movement that began in the late 19th century and ended in around 1945. It was the predecessor to Mid Century Modern design, which primarily dealt with graphic design, architecture, and furniture (more on this below).

Reacting to old ways of thinking about the world, Modernists rejected the strict moral codes and stuffiness of the Victorian Period. Artists, architects, writers, and designers aimed to break with the past, which obviously led them to a lot of experimentation. Their fresh ideas lead to groundbreaking art. In fact, you might recognize a few styles of visual art like cubism, dada, abstract, and pointillism.

Think of it this way: without the innovations of Modernism , we might still be living in Queen Anne Victorian homes or log cabins in the middle of forests.

After WWII, the descendant of Modern design - Mid Century Modern (1945-1965) - took hold in postwar Europe and America. Its effect on home design and construction was profound, especially in suburbs where the expansion of housing developments grew at a feverish pace.

The Postwar era growth in demand for homes and the expansion of suburbia can be traced to a few key factors in the United States.

First, cities needed to accommodate millions of returning Servicemembers who started families and careers in their new lives as civilians. What's more, these men and women came home as an educated, highly skilled workforce with higher earning power. They would come to have more income to buy a home than previous generations.

Second, for the first time in American history, a burgeoning middle class was on the move. An increase in automobile ownership, the construction of freeways and the continued suppression of streetcars (especially in Los Angeles) led many to accept the idea of commuting - sometimes long distances - to and from work.

Mid-Century Modern home subgenres go by the names Modified Ranch, a derivative of Frank Lloyd Wright’s Prairie Style, and Desert Modern of which there are many in Palm Springs. There’s also a minimalist style known as International.

Mid Century Modern residential architecture has common characteristics that help achieve goals of simplicity, modernity, and a connection to the natural world.

The Differences Between Modern and Contemporary Design

Many people innocently use the terms Contemporary and Modern interchangeably. However, the terms Modern and Mid Century Modern refer to historical periods whereas Contemporary describes the style of homes built today.

Contemporary homes in Los Angeles may reflect Modern architectural influences, but they deviate and incorporate the latest technology, construction materials, and style trends. Think of these borrowed architectural elements as music samples that form the underlying parts of a hip-hop music track, resulting in a brand new song with familiar beats and melodies.

So, who designed and built Modern and Mid Century Modern homes in Los Angeles?

Real estate developer and builder Joseph Eichler constructed several Mid-Century Modern homes (known as “Eichler Homes”) in the suburbs of Los Angeles. From time-to-time, they go up for sale.

Pierre Koenig’s Stahl House sits in the Hollywood Hills. It was one of a handful of homes built under commission from Arts & Architecture magazine. The homes built under the sponsorship are collectively known as Case Study Houses. You may recognize a few more names of participants like Charles & Ray Eames, Richard Neutra, J.R. Davidson who built homes in Pacific Palisades and Pasadena.