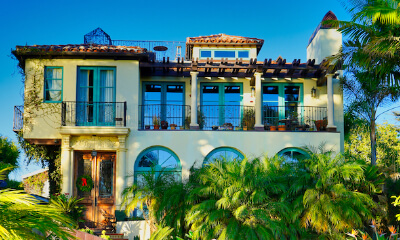 Mediterranean homes are one of several Period Revival styles that came on the Southern California architectural scene from 1919 to 1950. They are classic and never go out of style. In fact, a fair number of newly built homes and condos in Los Angeles still follow Mediterranean influences due to ongoing market demand.

The informal style of Mediterranean homes makes them well-suited to the laid-back SoCal lifestyle. They also match the rugged local landscape with its many palm trees. The weather pattern in Los Angeles even shares the same name, Mediterranean Climate, known for its hot summers, mild winters, plentiful sunshine, and little rain.

Following the Craftsman home era in the early 20th century, Mediterranean homes grew in popularity across the United States. From the 1920s onward, a heavy concentration of these houses was built in Pasadena and Santa Barbara. Neighborhoods like Hollywoodland (Upper Beachwood Canyon) and Whitley Heights featured them as part of the developments' overall Period Revival theme.

Their informal design conjured up the romance of countries that bordered the Mediterranean Sea, particularly Spain and Italy. The 20s were a time of economic expansion and fanciful desires, which no doubt contributed to their attractiveness to home buyers. What’s more, Period Revival styles represented a way for Californians to connect their contemporary with the region’s Spanish and Mexican past.

Harvard-trained architecture critic, Joseph Giovannini, once opined that “California today would somehow be less Californian without this architecture.”

The period following the First World War ushered in the “City Beautiful Movement” wherein cities across America sought to build grand city centers and erect large, imposing structures that would highlight their prosperity. Mediterranean and Art Deco designs became the go-to style for the movement.

In addition to residential construction, some commercial and civic buildings and churches around the Los Angeles area also took on Mediterranean Revival-inspired designs. In fact, a few branch libraries of the Los Angeles Public Library (LAPL) system are listed on the U.S. National Register of Historic Places.

The first design elements you'll see from the street that offer the obvious markers of a Mediterranean home is their thick walls, red tiles, and stuccoed surfaces. Their design, whether one or two stories, has plenty of curb appeal. They look great whether small or large and at any price point.

Mediterranean-inspired homes fit in naturally with the Southern California environment, not only because of the way they look but functionally, too. The elements of their design – characteristics like low-pitched, tiled roofs - are well-suited for warmer climates where the weight of accumulating winter snow is not an issue. Plus, tiles are durable in a place where the sun shines on them nearly every day.

These houses typically include large outdoor areas with pools, patios, and lush landscaping. Palm trees are a perfect match. Better yet, add an herb garden and Bocce ball court. The combination of outdoor spaces and open floor plans creates the ideal atmosphere for socializing and entertaining guests. Plus, cooling breezes to move through the house unencumbered.

The moniker “California School” was given to a group of prolific architects who designed Mediterranean Homes across the state. You may recognize names like Roland Coate, Myron Hunt, Reginald Johnson, Gordon Kaufmann, and Wallace Neff. Their ability to adapt traditional looks with innovative designs gave rise to the colloquial name of their works: California Mediterranean Style.