Homes for Sale in Larchmont Village 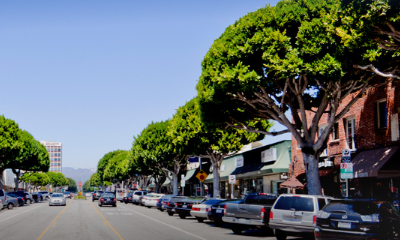 Search Larchmont Village houses and real estate listings. Home prices in the Larchmont neighborhood of Hancock Park are pricier than the Los Angeles County average. The housing stock in the district consists primarily of one and two-story single-family residences and estates.

Larchmont Village is a highly-coveted residential enclave chock full of well-preserved historic homes and tree-lined streets. Roads here are adorned with mature magnolias, elms, and sycamores. What was once considered suburban in the 1920s is now urban, but in the best possible sense; the vibe here is laid-back and elegant.

Based on information from California Regional Multiple Listing Service, Inc. as of July 1, 2022. This information is for your personal, non-commercial use and may not be used for any purpose other than to identify prospective properties you may be interested in purchasing. Display of MLS data is usually deemed reliable but is NOT guaranteed accurate by the MLS. Buyers are responsible for verifying the accuracy of all information and should investigate the data themselves or retain appropriate professionals. Information from sources other than the Listing Agent may have been included in the MLS data. Unless otherwise specified in writing, Broker/Agent has not and will not verify any information obtained from other sources. The Broker/Agent providing the information contained herein may or may not have been the Listing and/or Selling Agent. IDX provided by Sierra Interactive.
Neighborhoods in Greater Wilshire

Larchmont is a charming neighborhood that sits smack dab in the middle of the City of Los Angeles. The area was dubbed a 'streetcar suburb' from the days when the Los Angeles Railway Line once served the area at a time when Downtown Los Angeles once contained most of the city's residents. Emerging districts around downtown - in what would eventually be called the Greater Wilshire area - were suburbs. That's a pretty quaint notion by today's standards.

Before becoming a residential neighborhood, Larchmont was once barley fields. A few of the earliest homes were made from adobe that was scooped up from the nearby stream, "Arroyo de los Jardines" (Creek of the Gardens), that now resides within property boundaries of the Wilshire Country Club. Humble beginnings, indeed. In the 1920s, development began in earnest with a build-out of a Period Revival neighborhood.

In the center of Larchmont sits Larchmont Village, a retail shopping strip lined with boutiques, shops, and storefronts for local service companies. It was developed in 1921 around the same time many of the early homes here were built.

The Wilton Historic District sits in the southeast corner of Larchmont. If you love classic architectural homes, you'll love this enclave, home of 63 one and two-story Craftsman and Colonial Revival Bungalows. Half were built before the first World War, between 1907-1925 to be precise.

The district was added to the National Register of Historic Places in 1979 due to its architectural integrity, neighborhood continuity, and the relatively few changes made since the three tracts that comprise the district were first developed. The vibe of area avoids a cookie-cutter look due to subtle variances in design, particularly through the inclusion of Prairie and Oriental influences that made their way into some of the Craftsman homes.

Homes sit on large lots, set back from the street, and provide space for large front lawns. Many yards rise 5 to 7 feet from the curb, giving elevation to each house and additional visual variety over the otherwise flat terrain. Sub-tropical landscaping is the norm with plenty of palm trees and exotic bird of paradise flowers.

When you click a listing, you'll get a detailed summary of property information, including photographs. The listing overview includes interior features like the number of bedrooms and bathrooms, major systems (heating/cooling), size (in square feet), and other important details such as:

You can also review exterior features as well as the architectural style of the home. If any appliances are included with the sale, those will also be noted.

When available, Larchmont neighborhood information will be included along with local schools and similar homes for sale within in the 90004 zip code.

If you're buying a home, one of our full-service Larchmont real estate agents are at-the-ready to assist you. If you're selling a home in the Larchmont area, our listing agents will provide current market data, comparison properties (comps), and a highly-tailored marketing plan to make sure you get the best price for your home.

Search all Real Estate for Sale in Los Angeles