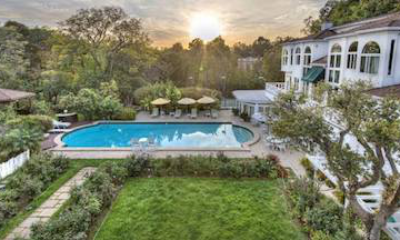 Holmby Hills is one of three communities comprising the Platinum Triangle of Los Angeles. It is smaller than the other two - Bel Air and Beverly Hills - but it is the most exclusive. Properties in the neighborhood include recently-built mega mansions and some of the most expensive (and historic) estates in all of Los Angeles.

It is a must-consider neighborhood for well-qualified home buyers to evaluate if they are looking to buy a stately mansion, in a park-like setting, within a large metropolitan area. The community straddles Sunset Boulevard, borders the Los Angeles Country Club, and is home to two parks, Holmby Park and De Neve Square Park.

Based on information from California Regional Multiple Listing Service, Inc. as of July 1, 2022. This information is for your personal, non-commercial use and may not be used for any purpose other than to identify prospective properties you may be interested in purchasing. Display of MLS data is usually deemed reliable but is NOT guaranteed accurate by the MLS. Buyers are responsible for verifying the accuracy of all information and should investigate the data themselves or retain appropriate professionals. Information from sources other than the Listing Agent may have been included in the MLS data. Unless otherwise specified in writing, Broker/Agent has not and will not verify any information obtained from other sources. The Broker/Agent providing the information contained herein may or may not have been the Listing and/or Selling Agent. IDX provided by Sierra Interactive.
Westside Neighborhoods

Holmby Hills shares its borders with Bel Air on the north; Beverly Crest, Beverly Hills, and Los Angeles Country Club to the west; and Westwood to the south and east. The portion of the community that sits north of Sunset Boulevard is lies within the 90077 zip code, while the 90024 zip code is used for parts south of Sunset Boulevard. The neighborhood is rich with public parks, lush landscaping, and English-style street lamps that were installed exclusively in the neighborhood in the 1920s.

Holmby Hills was first developed by Arthur Letts, Sr., and the Janss Investment Company, Lett's son-in-law's family business which had over two decades of experience in the subdivision business in and around Los Angeles. In 1919, Letts had purchased 3296 acres of what was Wolfskill Ranch and set aside 400 acres for an estate section that would become Holmby Hills, an area whose name he took from his family home in England and had already used in naming his grand Hollywood estate Holmby House. Letts kept a stake in the land but let the Janss family oversee development, a task they carried on after Letts died in 1923.

The development of Holmby Hills was handled differently than its Platinum Triangle counterparts, with less restrictive deeds on who could and found not buy and what could be built. In fact, the only notable restrictions were those banning commercial structures, requiring minimum setbacks, and forbidding subdividing lots for fifty years. The developers had faith that anyone with the means to purchase in their community would strive to meet a certain standard. As if to hedge their bets on the standards buyers would strive for, the first homes in the neighborhood were built by two of the Janss brothers, both moving in before the first lots were sold publicly. The houses they built set the standard for style, expense, elegance, and grandeur prospective estate buyers were expected to equal in their own homes.

The Janss Investment Company tried to further set themselves apart from their competition with subtle comparisons like touting Holmby Hills sites as offering elevated views "without steep grades" and by practicing discretion, with press releases rarely naming anyone who bought a lot.

Notable and Celebrity Holmby Hills Residents (Past and Present):

If you're looking to buy an estate in Holmby Hills, please contact us; our local real estate experts can answer all of your neighborhood and home buying questions.

If you're thinking of selling your luxury home in the Los Angeles area, our listing experts can create a custom market report for you with prices of recently sold homes nearby and the latest market statistics.