Homes for Sale in Hollywood, CA 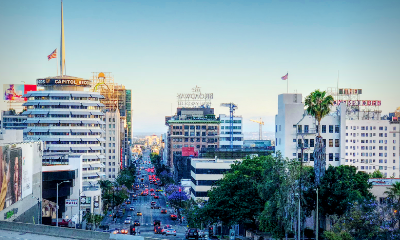 Search all Hollywood homes and real estate listings. Hollywood is undergoing a revitalization that's contributing to its growth and popularity. While Hollywood has been a longtime tourist stop and symbol of the motion picture industry, today it draws new residents eager to live in a tight pocket of creative energy with lots of amenities.

It is centrally located in the heart of Los Angeles and offers an urban lifestyle with a plethora of dining and cultural experiences. People love the area's conveniences and the tempo of an urban lifestyle, with a twist of sophistication. Great hiking in the Santa Monica Mountains is just minutes away. Register for a free account so that you can receive email alerts whenever new Hollywood properties come on the market.

Home and condo prices in Hollywood are at or above the L.A. County average. The housing stock consists of single-family residences along with luxury and high-rise Hollywood condominiums, many of which have been built very recently.

Thinking of buying a home in Hollywood? Our Hollywood real estate agents are neighborhood experts who can help you find your dream home. In addition to a continuous feed of listings from the largest MLS in Southern California, we can provide up-to-the-minute Hollywood real estate information such average home prices and house sales history so that you can make a well-informed decision.

If you're selling a home in the Hollywood area, our listing agents will provide current market data for home values, comparison properties (comps), and a highly-tailored marketing plan to make sure you get the best price for your home.

If you're a history buff or just love the motion picture industry, you'll have a blast finding hidden gems from Hollywood's past like old restaurants and bars where the stars of yesteryear would once mingle. Fans of historic architecture can walk the streets and take in residential and commercial masterworks. There are plenty of cultural gems here like Hollyhock House, which sits in Barnsdall Art Park. Several other iconic Frank Lloyd Wright houses are also nearby, including Storer House another showcase of his style.

Hollywood is compact and convenient. But, if you want to get to another part of town, hopping aboard a bus or Metro's Red Line is a cinch. But with a vast amount of music and theater venues in the area, you may never want to leave. Locals love the endless dining options and choosing from a wide array of cuisines.

If you love a sunny and moderate climate, you will love Hollywood. With approximately 288 sunny days per year and less than 20 inches of rain, Summer can get hot so find some shady retreats and maybe even a pool.

Hollywood was originally inhabited by the Native American Tongva people and called "Cahug-Na" (Place of the Hills). Spanish settlers revised the name of the area to Cahuenga in the 1700s. And in the mid-1800s, the area was known as Hollywood. There are a few stories of how the town got its name, but the most straightforward version to believe is that it was named for the abundance of native Heteromeles arbutifolia (California Holly).

Hollywood was officially incorporated in 1903 at a time it was still mainly farmland. It merged soon thereafter with the City of Los Angeles (1910).

Around the same time as the merger, motion picture moguls from New York started settling in Hollywood; Los Angeles had the better year-round, sunny weather for filming. It quickly turned into a hub for studios who employed many of the early residents. Today, Hollywood still draws dynamic people in the entertainment business and from tech firms, further transforming the district.

Griffith Park is just a few minutes away. Within the park's perimeter, you will find a vast network of hiking trails, many of which lead to the Griffith Observatory. The Griffith Observatory is a beloved spot for lounging after a hike or star-gazing in the planetarium at night. Right below the observatory is the Greek Theatre, an iconic 5,870 seat amphitheater opened in 1930. The L.A. Zoo is also part of Griffith Park.

Barnsdall Art Park was donated to the city by oil heiress Aline Barnsdall in 1927, this delightful 11-acre retreat in Los Feliz with ample green space and a variety of art classes, wine-tasting events, and other cultural events. The newly renovated Hollyhock House, Frank Lloyd Wright's first LA project built around 1920, is found here and offers tours on select days of the week.

Runyon Canyon Park is a 130-acre park with entrances at the bottom via Fuller Avenue and Vista Street, and off Mulholland Drive at the top. It offers a breathtaking panoramic view of the Los Angeles from Downtown out to the Pacific Ocean. The hiking trails draw a big daily crowd. Be forewarned; parking nearby can be tricky. There's a popular off-leash dog park right off Fuller Avenue.

Downtown Hollywood is packed with food and fun. Diners may choose among fine dining, classic steakhouses, sushi, burger joints, Mexican, or French cafes. Nearby Franklin Village is home to eateries and the ever-popular Uprights Citizen Brigade Theatre. (UBC). A few of the hotels in Hollywood have rooftop lounges and restaurants with killer views. If you prefer a quiet, more intimate place to chill, you won't be disappointed.

Hollywood & Highland is a large, vertical outdoor shopping complex with national chain stores and plenty of food joints. The area within and around the mall is always packed with tourist. It is also home to the Dolby Theatre where the Academy Award ceremony is held each spring.

Hollywood Farmers Market is held every Sunday in Downtown Hollywood (Ivar and Selma). The market offers a broad selection of vendors selling flowers, prime meats, fresh fish (shucked oysters too!), and an array of organic produce. Sometimes there is even live music!

Hollywood Bowl is a local favorite, one of the best venues in Los Angeles for live music. The iconic open-air amphitheater offers a wide range of events from opera, to rock n' roll, to films accompanied by a live score.

Hollywood Forever Cemetery is a 62-acre cemetery that hosts a screening of film screenings during the summer. Yep, you can roll out a blanket amidst the tombstones and watch a movie. Check out the annual Dia de los Muertos festival every Halloween.

Theaters! As one might expect in the "Entertainment Capital of the World," Hollywood is home to numerous live and motion picture theaters. Arclight is the go-to, with 14 screens (including the Cinerama Dome) and a café that actually serves good food. Oh, and liquor in case you like to watch movies while enjoying an adult beverage The Hollywood and Highland complex is home to the world-famous Chinese Theatre. But, be ready to navigate through the tourists out front on your way to the box office. In nearby, Los Feliz, you can check out Vista Theater (1923) and Los Feliz 3, two considerably more laid-back theaters.

Other local entertainment venues of note include: