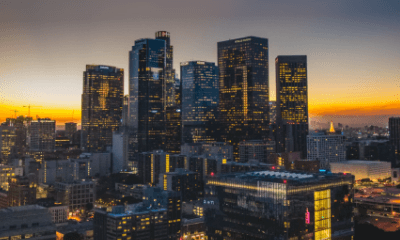 Search all Downtown Los Angeles real estate listings below. Downtown Los Angeles (DTLA) is a bustling, thriving part of the city where an international community of professionals and artists convene to live and work. It has long been the city’s cultural hub (even more so in recent years) with a wide range of engaging activities from museums to dive bars.

Downtown is a good fit for home shoppers who want an urban lifestyle and all the conveniences that come with it; everything you want or need is nearby. Be sure to register for a free account so that you can receive email alerts whenever new Downtown Los Angeles properties come on the market.

Downtown Los Angeles continues to grow at a frenetic pace, with competing developers building luxury towers and vying for historic commercial buildings to renovate and repurpose. The core residential areas are in a continual state of construction with newly renovated lofts, condominiums and luxury towers opening their doors to eager homebuyers.

Nearly all of the housing stock in the area consists of condos and lofts. The number of single-family homes for sale are very few but can be found from time to time. Those that remain were typically built decades ago, some as far back as the late 19th century.

Downtown represents more than a century of urban development and history. The architectural style of the lofts and condos for sale in Downtown Los Angeles range from Beaux-Art and Art Deco buildings in the Historic Core District to Contemporary units just blocks away.

When the “Jewel of Downtown” Eastern Columbia Building (1930) converted to lofts, home buyers had a chance live in one of the city’s most recognizable landmarks. The clock tower of the Art Deco structure, with its terracotta turquoise tile and gold leaf torches, boldly rises into the skyline. The restored and upgraded building has luxury apartments and penthouses.

In terms of getting around, ,ost of the downtown area is flat except a hilly section financial district and Bunker Hill. Residents can also conveniently access one of several Metro stops to catch a bus or subway. Some residents here forego car ownership altogether and rely on public transportation and the use of ride-sharing services.

In 1781, forty-four Mexican settlers, deemed “Los Pobladores,” arrived and put down roots in today’s Downtown Los Angeles. With an influx of land speculators at the end of the 1800s, the city’s population grew rapidly. Downtown soon became a regional banking center, and during the 1920s, it was nicknamed “Wall Street of the West.” Throughout the mid-20th century, DTLA experienced a period of economic hardship as more of its residents moved to the suburbs. Today’s resurgence is quite impressive. Millions of dollars are pouring into the area for broad development initiative, the lease of which are several swanky housing developments.

Not long ago, Angelenos would say “There’s nothing to do Downtown.” That is no longer the case. The ongoing resurgence brings new life to the oldest part of town. Yet some of the gems have been here all along.

The Central Library (1926) has one of the widest selections of books and magazines of any public library in the country. There are many courses offered, even a guided meditation class. The building is a Historic Landmark and is on the National Register of Historic Places. It is headquarters to the Los Angeles Public Library (LAPL) System.

Los Angeles Athletic Club (LAAC) is the city's oldest private club but has a new flair. Its motto: Health, Recreation, Grace, and Vigor is equally matched by its stellar athletic facility. The club provides additional amenities including a spa, barbershop, boutique hotel rooms, restaurants and a speakeasy.

In the heart of DTLA, Pershing Square (originally called La Plaza Abaja) is the perfect meeting place for lunch, a concert or a public rally. Its grassy areas, amphitheater, chess tables and playgrounds entertain all ages. From November to January, you can enjoy ice skating and in the summer months, a free concert series.

Nearby Elysian Park (1886) offers ample green space (600 acres of it!) as a welcome haven away from the cityscape. Popular among the locals, this park has a sweeping view of the DTLA skyline and a multitude of natural areas to explore. Parking is free, and there's plenty of it!

DTLA is packed with killer eateries, cafes, and award-winning restaurants. Speakeasies are a thing here, along with fine dining restaurants, rooftop bars, and hotel lounges.

In the Arts District, swarming food trucks, breweries, and cafes satisfy residents and spots like Bestia draw Angelenos from all over. In South Bank, The Original Pantry Cafe (1924) is the quintessential 24/7 diner. Just remember to bring cash. Cole’s (1908) is another mainstay, equally famous for its French dip and speakeasy, The Varnish.

Two blocks from Pershing Square, Grand Central Market (1917) is an emporium with dozens of food vendors offering up fare including barbeque, French, Asian, California, Mexican, Italian, Southwestern, baked goods and ice cream. You can also enjoy screenings, live music and game nights on Thursdays. GCM is open daily (8:00 am to 10:00 pm) easily accessible by foot, metro, or bus. Parking in the area can be tough to find.

Living in DTLA means you’ll always have convenient access to fresh organic produce; there are three regularly-scheduled farmers markets each week. Open every Sunday from 9:00 am to 3:00 pm, this Historic Downtown Farmers Market provides locals with top-notch produce and an excellent selection of cheese. Prepared food and drinks are on the menu, too. Vendors also sell flowers, skin care supplies, and products for pets. The Pershing Square Farmers Market runs every Wednesday from 11:30 am to 2:00 pm. The Bank of America Farmers Market is open on Fridays from 10:00 am to 2:00 pm.

Open Monday thru Saturday to trade and the public, The Original Los Angeles Flower Market is an institution that has been around for more than a century, selling fresh flowers from around the globe.

Living in DTLA, some of the city’s premier spots for music, dance, theater, art and professional sports are right outside your door.

Disney Concert Hall, designed by Frank Gehry, is a unique venue showcasing classical music and jazz. Its state-of-the-art acoustic design makes this 2,265-seat hall a spectacular experience for everyone; you can hear everything.

Dorothy Chandler Pavilion (1964) stages productions of the L.A. Opera and dance companies. Enjoy a glass of bubbly at intermission and a view of the exquisite chandeliers.

Mark Taper Forum and Ahmanson Theater both opened in 1967 and are part of the Center Theatre Group, bringing thought-provoking, exciting new productions to the stage.

Opened in 2015, the Broad Museum is one of the newer fixtures on Bunker Hill. It has an impressive collection of postwar and contemporary works of art and hosts highly-coveted exhibits. Programming includes screenings and outdoor summer concerts. General admission is free, but reservations are necessary unless you try the standby line (which is always long).

More things to enjoy in DTLA

Do you have questions about homes, condos, or lofts for sale in Downtown Los Angeles? We’d love to answer them! If you’re interested in viewing properties now, contact us today to schedule a private showing. We know the ins-and-outs of the market and our Downtown Los Angeles real estate agents can help you get the best deal.

If you’re selling a property in Downtown Los Angeles, feel free to get in touch for a custom market report based on the most recent area sales data. We can update you on current Downtown Los Angeles real estate trends, outline the best marketing strategy for your property, list it on the largest regional MLS (there's more than one), advertise it on our website, and help negotiate the sale.