Homes for Sale in Los Angeles 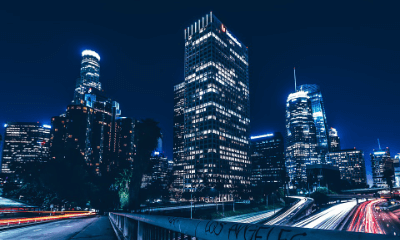 Los Angeles is the largest city on the West Coast and the second-largest in the United States. Among California's major cities, home prices in Los Angeles fall just behind San Francisco and San Jose, with San Diego closely behind in fourth place.

RubyHome displays accurate real estate listing data from the largest MLS in California. Contact our expert Los Angeles real estate agents for more information about houses for sale in Los Angeles, information about neighborhoods, or to schedule a private showing of a listing. Be sure to register for property alerts to know immediately when new homes - taht match your criteria - come on the market.

L.A. is the second most populated city in the United States. Known for its excellent year-round weather (sunshine) and being the entertainment capital of the world, the City of Angels has a reputation for comfortable living, glamor and fun. Whether you love the beach, hiking or big city living, there's something here for everyone. 18.7 million Angelinos call it home. Los Angeles isn't just for wannabe actors, musicians and artists. The city is also home to aerospace companies, a thriving tech scene, fashion design, global trade and finance.

The City of Los Angeles operates from city hall, downtown. Furthermore, about 90 neighborhood advisory councils operate independently and form a strong base of civic representation.

If you’re thinking of taking your education to the next level, L.A. is home to top-ranked universities like University of California Los Angeles (UCLA), University of Southern California (USC), and California Institute of Technology (Caltech) and Loyola Marymount University (LMU).

The City of Los Angeles Department of Recreation and Parks oversees 444 park sites and 16,000 acres of parkland.

Hiking the Santa Monica Mountains is a quite popular activity in L.A., giving outdoor enthusiasts a great workout that is rewarded by stellar views of the city and Pacific Ocean. Griffith Park is a popular recreation area, sporting 53 miles of trails shared by hikers, joggers, cyclists and horses. It’s also home to the iconic Hollywood Sign atop Mt. Lee.

Beaches get particularly busy on hot weekends where Angelinos go to escape the inland heat and to hang out on the sand, swim, surf, or play beach volleyball. Popular beach areas include Malibu, Santa Monica, and Venice. A little farther south you will find and Manhattan, Hermosa and Redondo Beaches.

Science lovers will enjoy sweeping city views and nighttime stargazing through telescopes at the Griffith Observatory. Both kids and adults love seeing the space shuttle Endeavour on permanent display at California Science Center.

Among the dozens of museums in the Los Angeles area, The Getty Center (The Getty) and Los Angeles County Museum of Art (LACMA) are two very popular choices.

Homes in Los Angeles are expensive compared to much of the rest of the country. So many people live and move here each year that housing is in short supply. L.A. County is huge, covering 4,000 square miles. There are 158 cities and unincorporated areas, comprising 114 neighborhoods. Yet, there is very little available land; most was consumed by the Postwar housing boom and subsequent expansion of suburbia. The ability to spread out is tapped out; most of the county is now developed.

Long commute times are a fact of life here. That’s why home shoppers will often take a closer look at neighborhoods near their workplace or close to major public transportation hubs, like subway stations. Our map search tool comes in very handy, making it easier to zoom in and out of the neighborhoods that interest you, by location.

As a mature metropolis, the most practical thing to do is build up instead of out. Construction cranes dot the sky in several parts of town; high-rise condos and multi-unit buildings create new housing units and revitalize old neighborhoods. However, the pace of new construction and regulations limit how much new inventory comes online each year.

Always get the newest Los Angeles properties; this page is updated with Los Angeles real estate listings several times per day from for the most extensive Los Angeles MLS.

When you click on a listing, you’ll see important property details like the price, year built, size of the home (square feet), size of the lot (acres), number of bedrooms and bathrooms, and other details. Interior and exterior features like pools, floor materials, fireplaces, appliances will be itemized. The architectural style of the home will also noted. You’ll be able to check the number of days home has been on market (DOM), the MLS number, and the current MLS listing status (active, under contract, or pending). If HOA fees are applicable, those will also be presented.

Use our maps to see where the house is situated and read up on Los Angeles area information such as local schools and public transportation. You will also see a list of similar properties for sale nearby that will show you additional Los Angeles homes that you might find appealing.

If you're looking to buy a home, contact our Los Angeles Realtors®; we're the LOCAL experts and can answer all of your Los Angeles neighborhood and home buying questions.

If you're planning to sell your home in the Los Angeles area, our listing agents can provide a list of houses recently sold nearby (a.k.a. comparables) and up-to-date Los Angeles real estate market data.