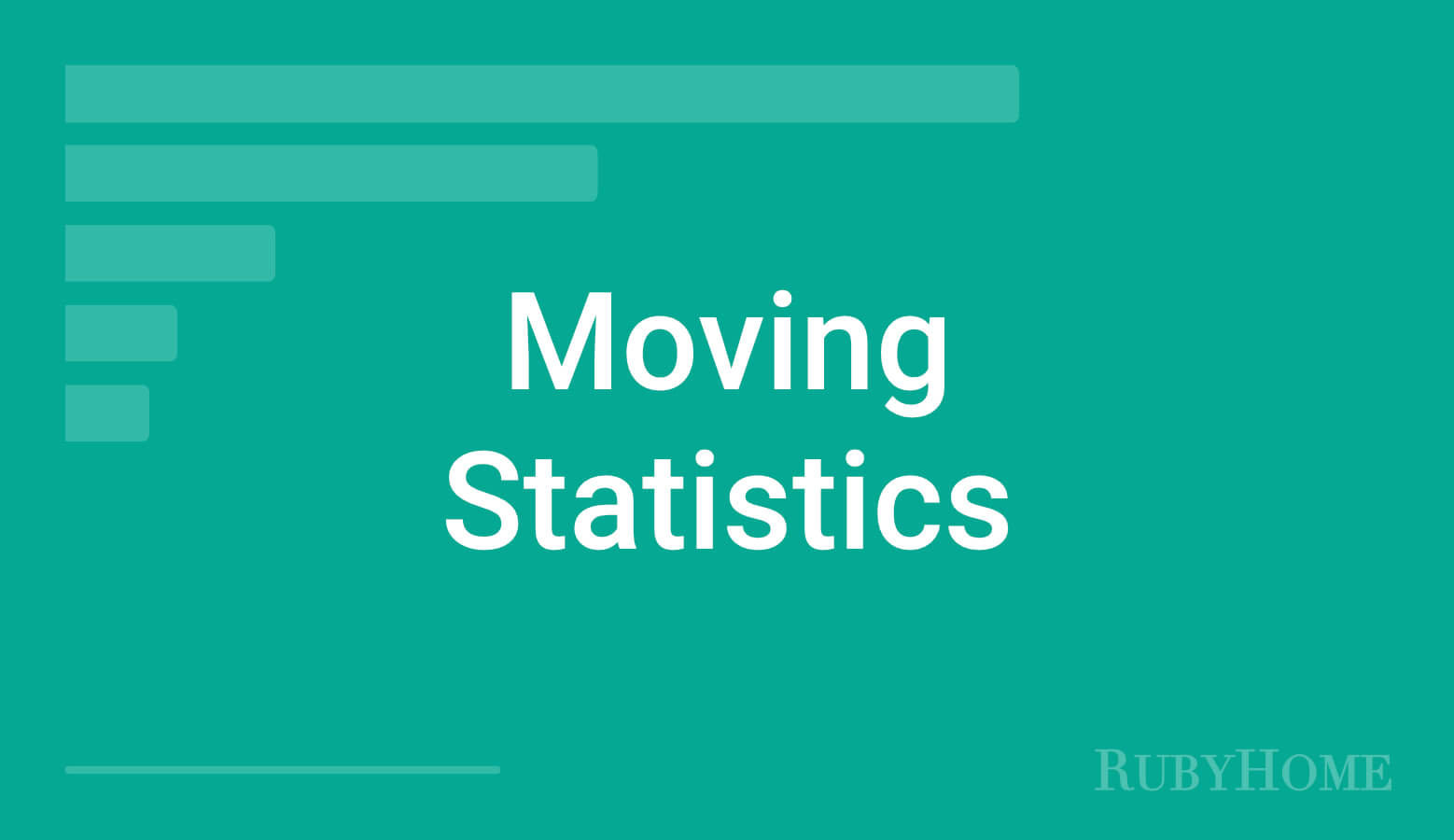 2021 moving trends saw the lowest number of people moving in decades, and the current moving rates are less than half of what they were in the 1940s.

Like pre-Covid moving trends, people moved to warmer states and less densely populated cities & suburbs. The search for more affordable housing prices remained the most important reason for local moves, while jobs were most important for long-distance moves. Moving industry statistics showed a funny thing, though: when large numbers of people moved to the same low-density areas in pursuit of affordable housing, those migrations – particularly to the South and West - increased the housing prices in these regions by nearly 33%.

We’ve collected and analyzed the most recent moving industry statistics, and here is a summary of our findings:

How Many People Move Each Year?

Percentage-wise, that’s about 8.4% of the U.S. population and that’s the lowest annual rate recorded since 1948.

Current mobility rates are half what they were in the 1940s – when one in five Americans moved each year – and have been steadily declining since the mid-1980s.

According to U.S. Census data, in the past five years, the annual mover rates and the number of movers fell yearly, despite the national population growth. 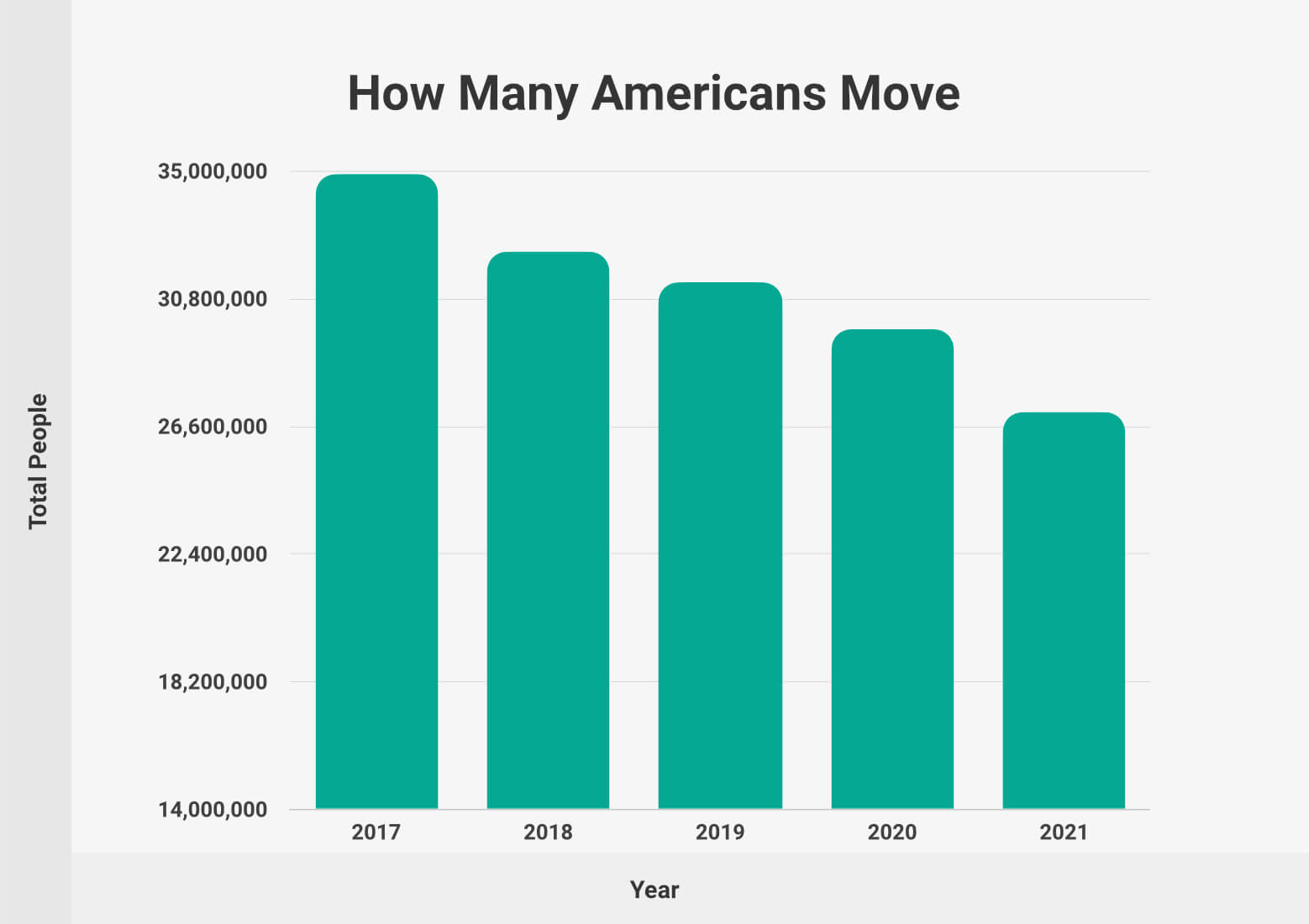 The table below shows the number of people who moved each year from 2017 to 2021: 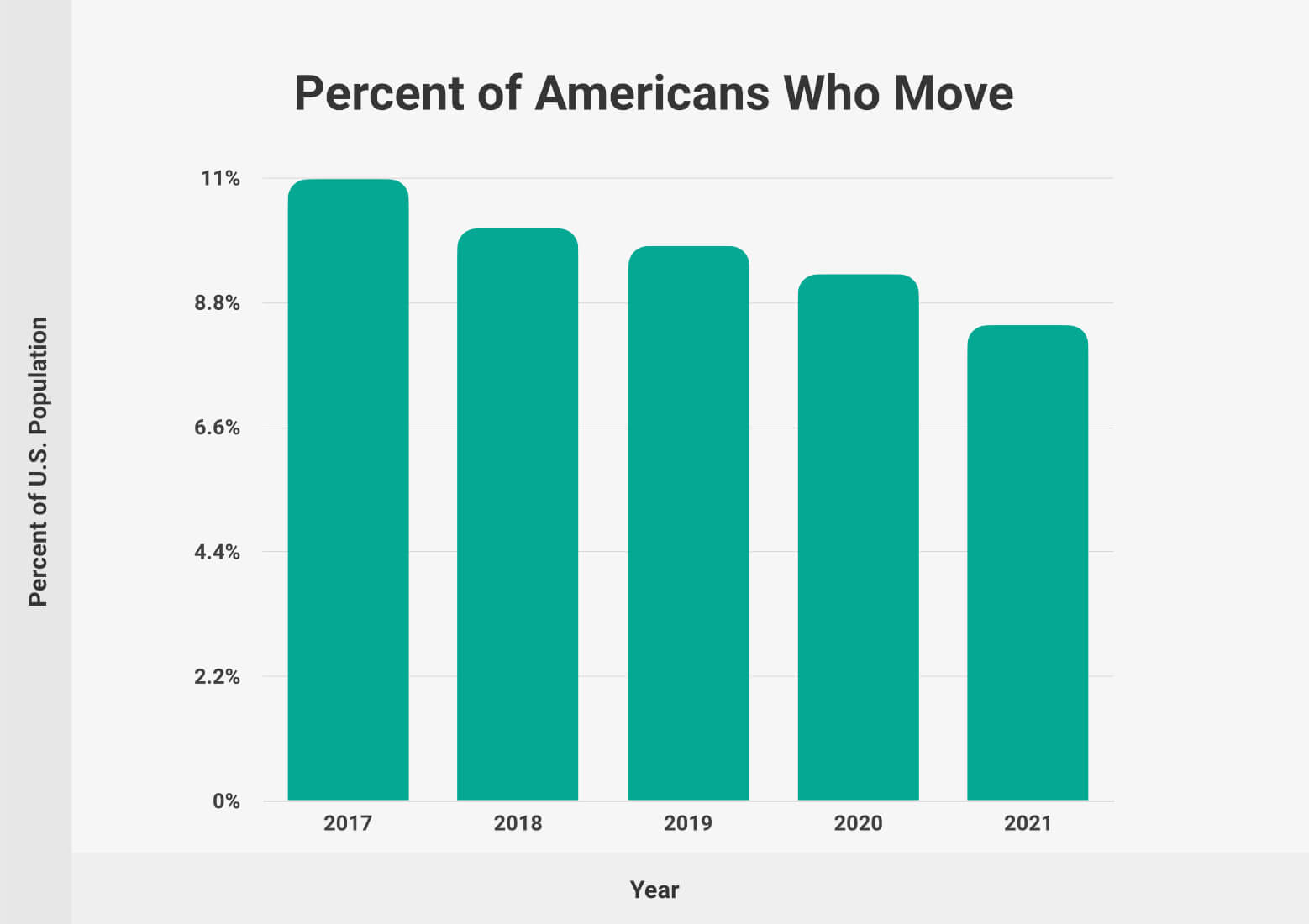 Here is a table showing the percentage of the U.S. population that moved from 2017 to 2021:

Where Are People Moving?

Historically, people moved for various reasons -- whether across the country or the globe -- like living in a better climate, economic opportunities, and a better future.

Presently, and within the United States, these reasons still hold up as primary motivators for people to move from one state or region to another. 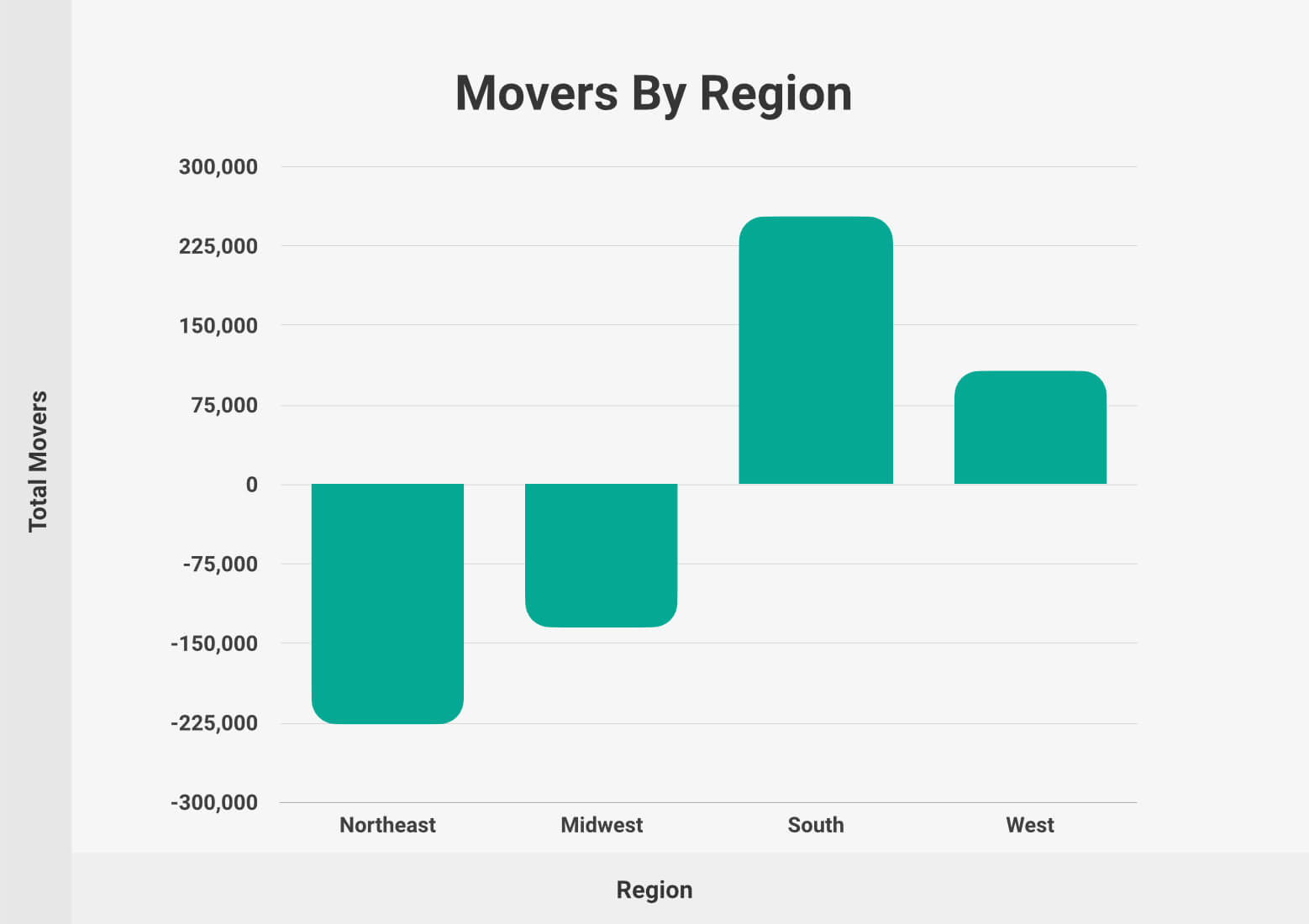 This table summarizes the net moving inflow/outflow per region in 2021:

The Northeast has continued its population losing streak because of its harsh winters, high cost of living (New York, Massachusetts, and Washington, D.C. are 3 out of 5 most expensive places in the U.S.) and limited job availability (Google, Apple, Dropbox, Oracle and other tech and non-tech large employers have recently moved or expanded their operations out of the Northeast and into less costly regions, such as Texas).

State-to-state U.S. migration is driven by the same reasons that motivate people to move across the regions: warmer climate, affordable housing, and available employment.

In 2021, Florida took the top spot for net migration gain, with 220,890 more people moving into the state than leaving it, followed by Texas, Arizona, North Carolina, and South Carolina. 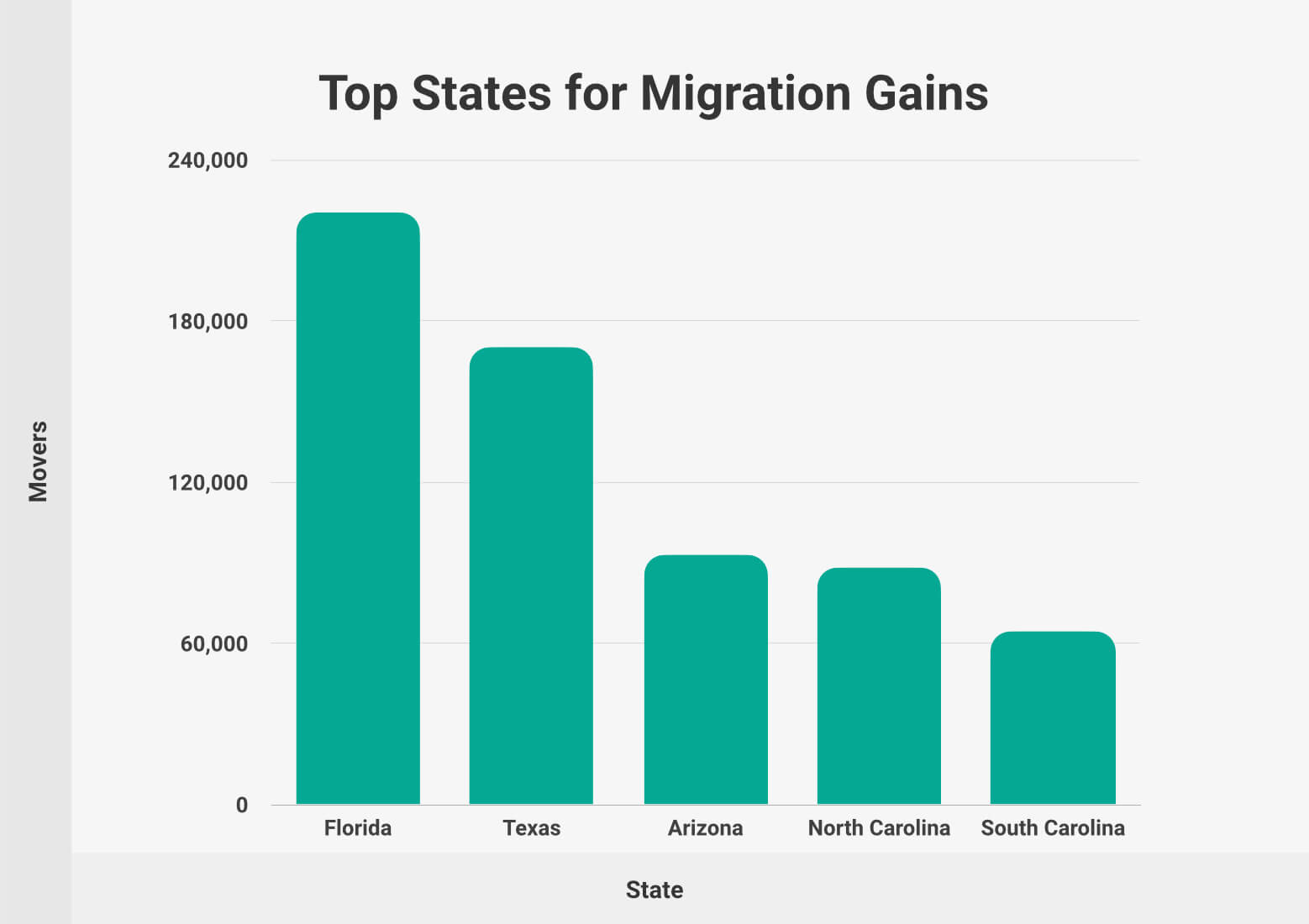 Below are tables showing the 2021 net migration gains by the number of people for the top 5 states. 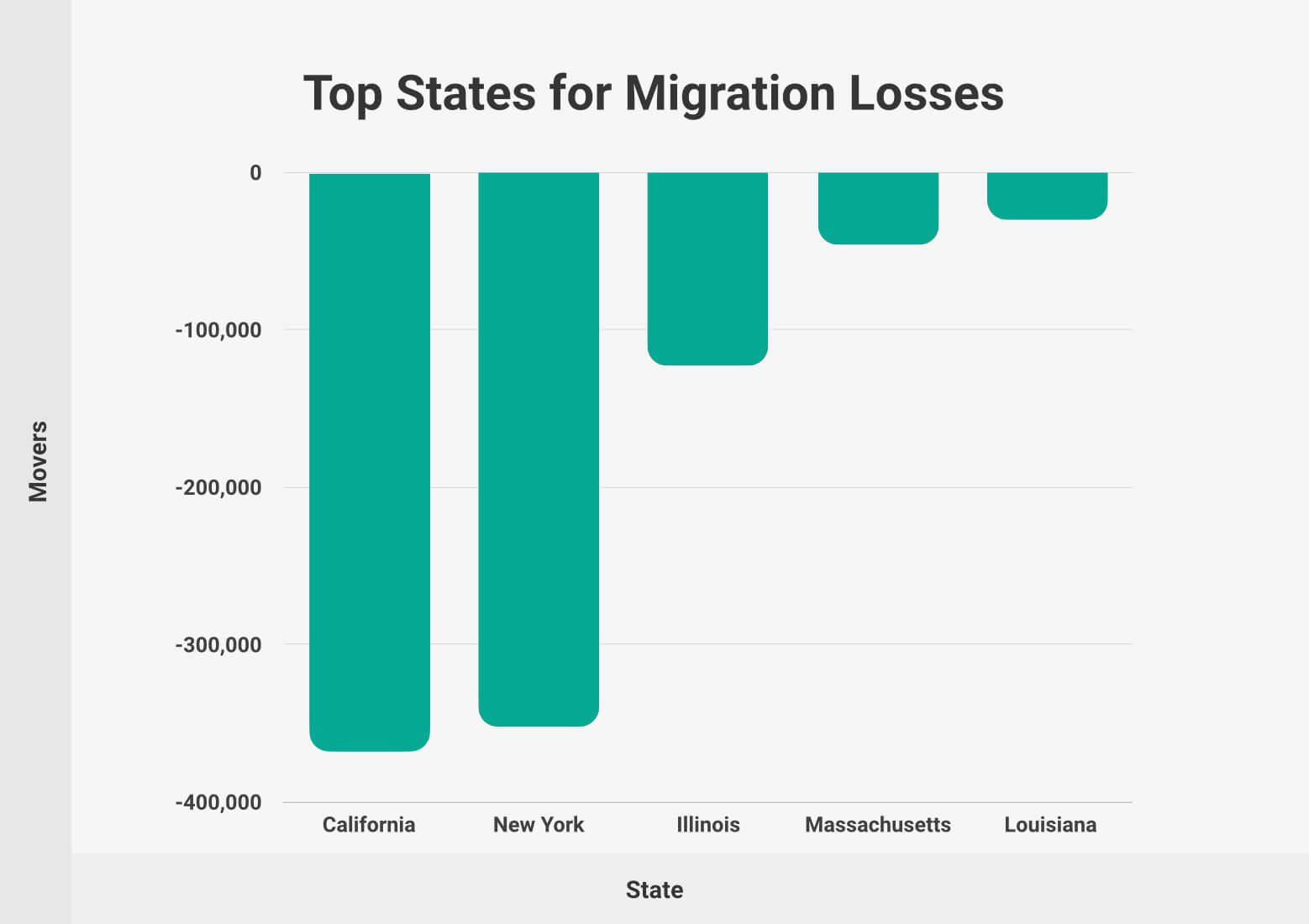 The table below shows the 2021 net migration losses by the number of people for the top five states.

While Florida and California both are highly coveted states, with the year-round warmer weather, the biggest differences in attracting the movers seem to be the cost of living and housing prices.

The major metro areas with biggest gains in 2020-21 were located in the Sun Belt, especially Texas, Florida, Arizona, North Carolina, and Georgia. Dallas (+97,290) led the list, followed by Phoenix, Houston, and Austin, Texas. 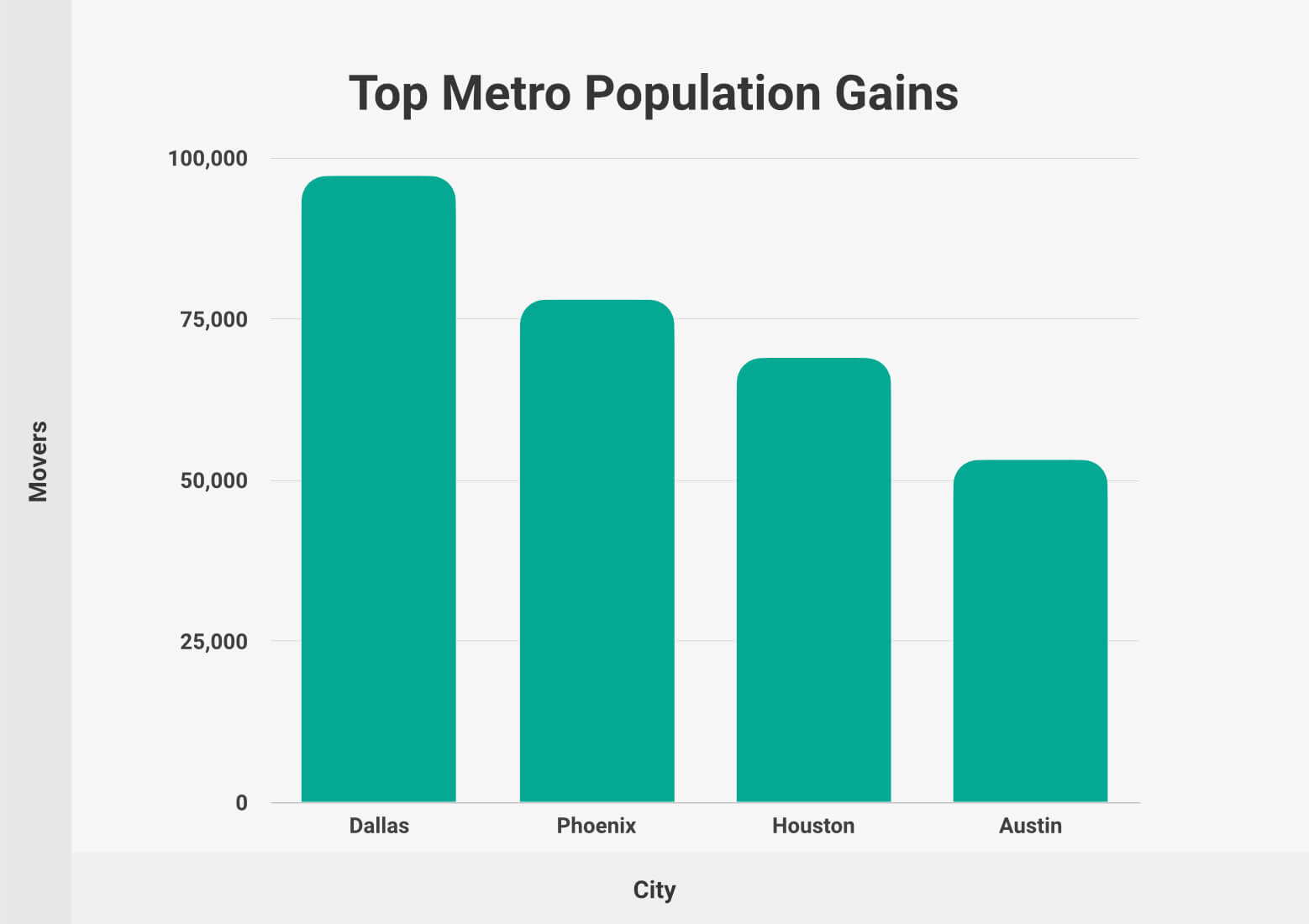 Here’s a table showing the areas with the greatest population gains in 2021.

Metro areas with population losses are primarily located in coastal areas, the industrial Midwest, and parts of the South. Those with the greatest numeric losses are New York (-327,955), followed by Los Angeles, San Francisco, and Chicago. 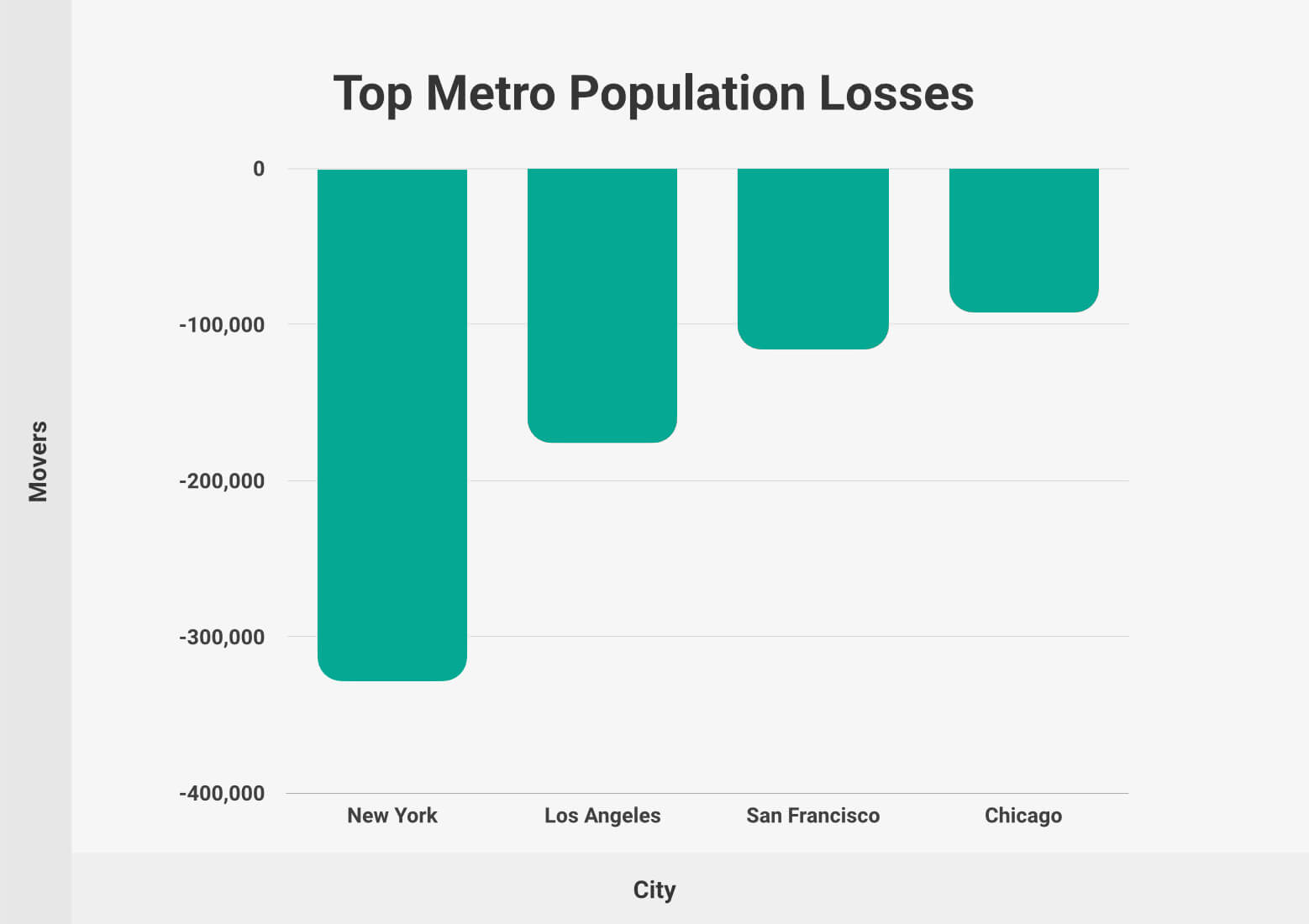 Here is the breakdown of top metros with the most significant population losses in 2021.

Why Do People Move?

People move for various reasons, but the most common motivator is more affordable housing, especially during pandemic years.

According to the U.S. Census, nearly half of all movers in 2021 cited housing-related reasons. The next-most prevalent reasons for moving in 2021 were related to family, jobs, and other reasons (in diminishing order). 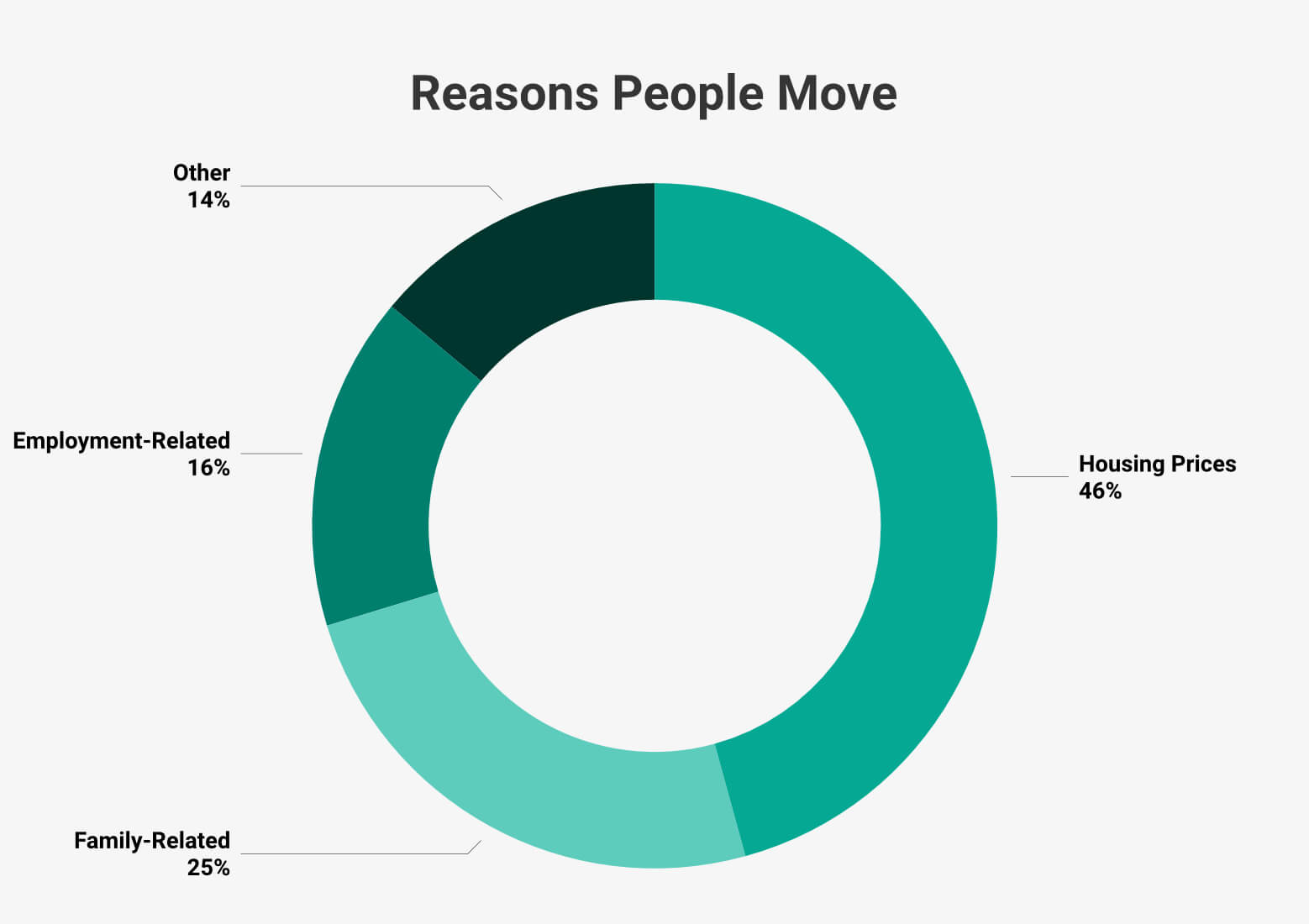 Here's a table showing the principal reasons for moving within the U.S. in 2021, based on the CPS Migration/ Geographic Mobility Census data.

Similarly, in 2017-2020, housing prices were the most prevalent reason for moving, followed by family-related, job-related, and other reasons. Here’s a table showing the reasons people moved from 2017 to 2020.

It's worth pointing out that most people move locally – thus, the prevalent reasons in this section are the primary motivators for local moves.

For long-distance moves, the main reason becomes jobs, followed by housing prices, except for older Americans, who primarily move to be closer to their family. A better climate also becomes a significant motivator for moving long-distance.

How Far Do People Move?

In 2021, less than one-fifth of all American movers changed states, while more than half moved within the same county. 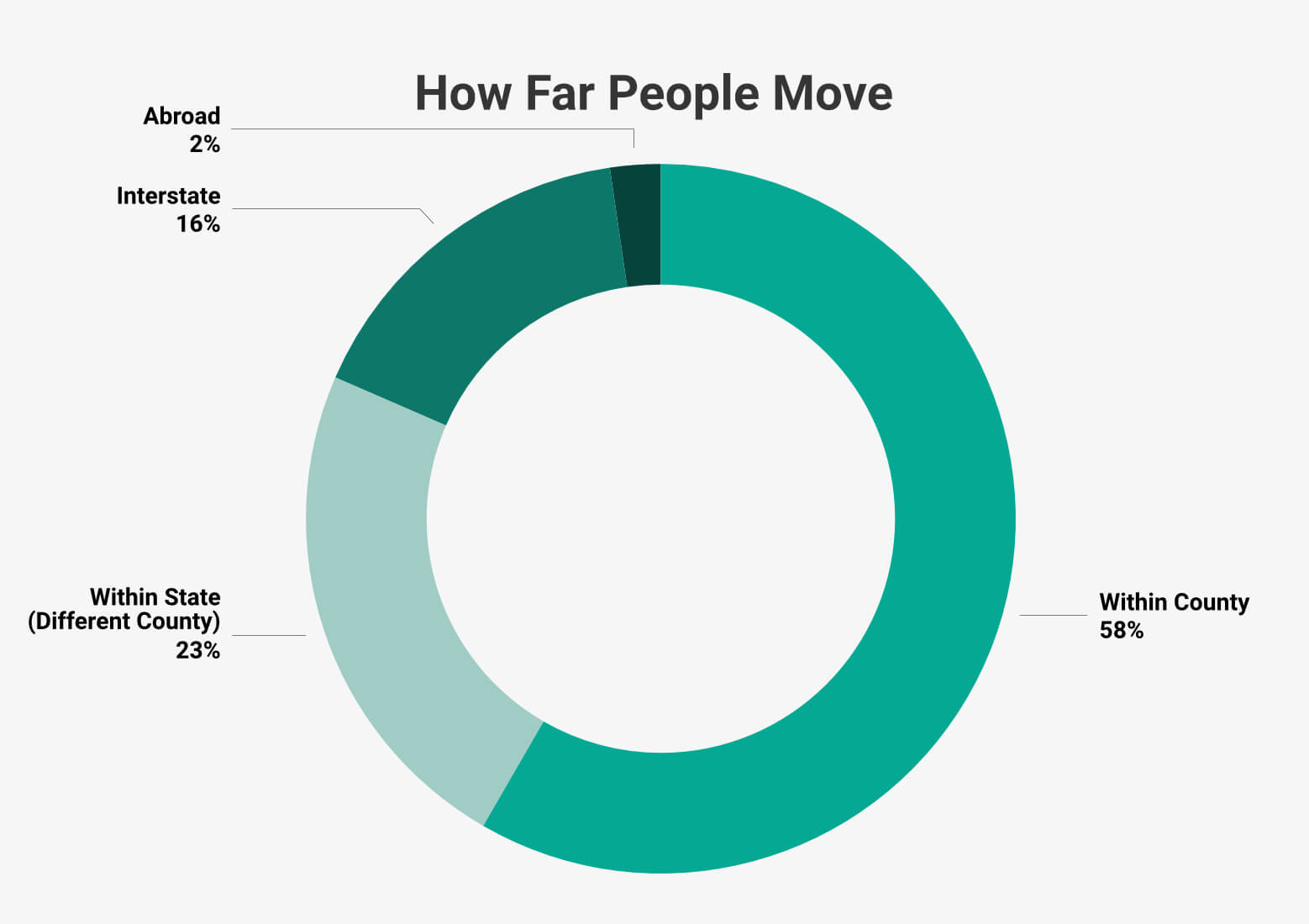 The table below shows a breakdown of the type of move, based on the Census 2020-2021 moving industry data.

Interestingly, the 2021 breakdown of moving types is very similar to the breakdown in the past five years, despite their differences in the moving rates. Every year between 2017-2020, the vast majority of moves were local, with less than a fifth of all movers leaving their state and about 60% moving within the same county. Here's a table showing a breakdown by moving type for 2017-2020, based on the Census data.

Why Are Moving Rates Declining?

While there’s little consensus as to why Americans are moving less than in the past, the three factors that seem to play a role are a demographic change, housing affordability, and changes in labor dynamics.

According to Harvard’s Joint Center for Housing Studies and World Economic Forum:

While high housing prices are a significant motivator for moving, the relationship between moving trends and housing price increases is related.

When many people move into the same area, they create an increased demand for affordable housing. In fast-growing markets, the increased demand for housing often creates housing inventory shortages, which, in turn, increase housing prices. Thus, continuous migration (especially in a short time frame) into the same area eventually makes the market unaffordable, creating a moving outflow from this area.

According to Freddie Mac, the most recent significant migration period to the South and West (2020-2022) was initially motivated by the lower median prices of homes in these regions compared with regions from which people moved.

Other factors, such as low mortgage interest rates and housing shortages in the South and West, also contributed to the housing price increases. 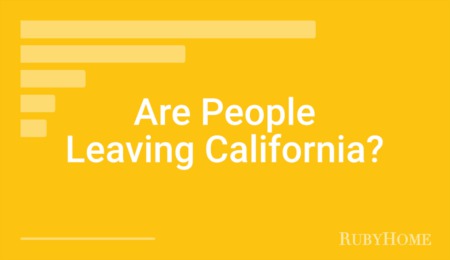 How Many People Are Leaving California (2022) 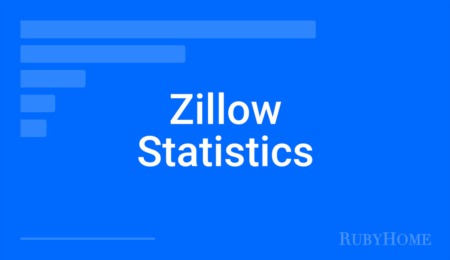 Founded in 2006, Zillow is a tech-driven real estate marketplace that generates revenue by selling advertising on its ...