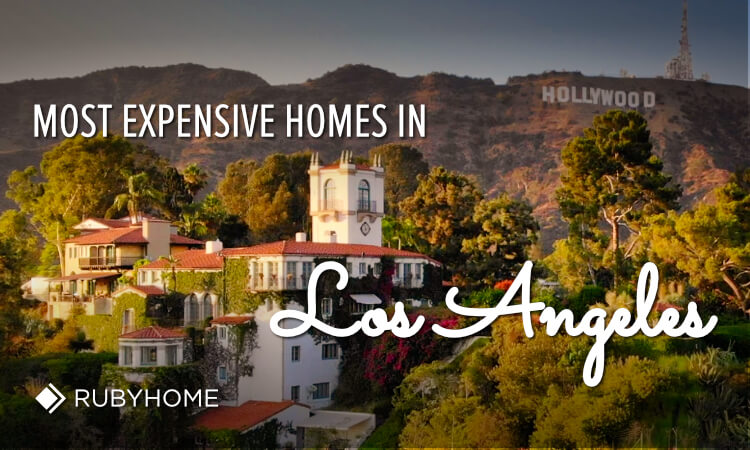 This article come in two parts. The top half ranks the most expensive homes in Los Angeles ever sold, by sales price. The bottom half ranks Los Angeles’ priciest homes that are currently for sale.

The Most Expensive Homes in Los Angeles Ranked

This oceanfront estate in Paradise Cove Bluffs set a new record as the most expensive home in Los Angeles (and California) in October 2021. At the time of sale, the purchase was second in the United States only to the $238M New York penthouse purchase by billionaire Ken Griffin.

Los Angeles County Assessor’s Office records show that the main house, built in 1980 and upgraded in 2010, is 11,810 square feet. There are three other sizeable buildings on the plot, guesthouses: one built in 1946 and two in 1956.

The home went up for sale originally in 2020 with a $250M asking price. The Wall Street Journal reported the buyers were Marc Andreessen, internet pioneer and investor, and his wife Laura Arrillaga, philanthropist.

Reports indicate a total of thirteen structures on the premises, including a converted barn for housing a fleet of cars, screening room, cabana, estate caretakers’ quarters, and so on.

Built and designed by Roland Coate in the 1930s for Jack Warner (former president of Warner Bros.), the Warner Estate has seen its share of the glitz and glamor, having been a social milieu itself to the rise of Hollywood. It had originally been a 15-room Spanish colonial-style mansion before its remodeling, with actor and interior designer William Haines decorating the interior and renowned landscape architect Florence Yoch designing the grounds. Coate added the breathtaking Greek Revival portico, while Haines followed a Georgian style to decorate the rooms. The front doors open into massive two-story entrance halls, with 18th-century English paneling adorning the living room walls and the ceiling lit by a George III-style chandelier. This romantic Georgian sensibility extends into the dining room with its Adamesque serving table, 48 Regency-style dining chairs, and a sweeping 19th-century French wallpaper. The library serves as a screening room, filled with comfortable sofas and a portrait of Ann Warner painted by legendary surrealist artist Salvador Dali hanging over the fireplace.

Jack Warner lived in the estate from 1937 until he died in 1978. His widow lived there until her passing in 1990. Asylum Records co-creator David Geffen acquired the estate for $47.5 million. In February 2020, David Geffen sold the estate to Amazon founder Jeff Bezos for a whopping $165 million, a record-breaking sale for a private residence in Los Angeles.

This 25,000 square foot Chateauesque mansion was built in the 1930s by Summer Spaulding, inspired by the French Neoclassical Style. Meticulously placed and symmetrically cut limestone covers the exterior. The interior is something straight out of "The Great Gatsby," with a grand ballroom, vaulted foyer, and scaled formal rooms. The sprawling estate sits on over 10 acres of land and boasts 26 rooms, a 75-foot pool, gardens designed by Henri Samuel, and a pool house and guest house designed by architect Wallace Neff. Among the more fascinating features of this pricey estate are its secret underground tunnel, a wine vault that can hold up to 12,000 bottles, and an underground garage that fits 40 cars.

Civil engineer Lynn Atkinson commissioned the original mansion as a gift for his wife, who dismissed the estate as "pretentious." Hotelier Arnold Kirkeby then acquired it in the 1940s for $200,000. In 1986 it was bought by billionaire Jerry Perenchio, who then sold it in 2019 to Lachlan Murdoch for $150 million.

Classic television fans may recognize the Chartwell Estate as the Clampett family home from the sitcom "The Beverly Hillbillies," which aired on CBS from 1962 to 1971.

Once upon a time, “The One” was hyped as the biggest (105,000 square feet) and most expensive ($500M initial asking price) home in America. Instead, when the property sold in March 2022, The One became the fourth most expensive home in Los Angeles.

The development of the 21-bedroom, 49-bathroom mega-mansion by Nile Niami spanned a decade that included cost overruns and bankruptcy, eventually culminating in a court-ordered sale, an auction price of $126M. With the 12% buyer premium, the total price was $141M. The winning bidder was Richard Saghian, CEO of Fashion Nova.

Perched on a promontory overlooking the Hotel Bel Air, the home boasts panoramic views across the Los Angeles Basin from downtown to the Pacific Ocean. Enjoy the vistas from inside from the 10,000 square foot sky deck.

Inside, the amenities include a nightclub, full-service salon and spa, and 40-seat theatre.

The grounds include a 400-foot outdoor running track, putting green, and five pools.

10671 Chalon Road -- a two-home, four-parcel estate spanning 4.6 acres -- sold for $133 million in December 2021, making it the second-most expensive home sold in Los Angeles County in 2021 and the fourth-highest price ever paid in California. The seller was Japanese business mogul Hideki Tomita, CEO of DIP Corporation. The buyer was Brian Armstrong, CEO of Coinbase.

The main house (10671 Chalon Road) was designed by architect John Pawson and built in 2009 and 2010. Size-wise, it is 18,023 square feet and includes 6 bedrooms and 10 bathrooms. Interiors were designed by Atelier AM and landscape design by Jonathan Bell.

The hedged-in estate includes amenities one would expect, such as a tennis court, two pools (one for each house), and a cabana.

The compound occupies a promontory in the West Gate portion of Bel Air near Hotel Bel Air, ensuring territorial views of the canyon and city lights.

The Manor (a.k.a. Spelling Manor) is a 56,500 square foot French chateau-style mansion with 123 rooms. For some perspective, it's bigger than the White House!

Spelling tailored the home for himself and his wife Candy, who enjoyed over 20 custom rooms, including a barbershop, gift-wrapping rooms, humidity-controlled silver storage rooms, and a flower cutting room. The Manor has a French cheese and wine room, furnished with all the trimmings of sidewalk cafe-style chairs and tables. There is even a bowling alley with its very own shoe closet.

In 2011, the Manor sold for $85 million to Petra Ecclestone, who set about renovating the home for 12 weeks. Her lavish renovations included using black striped marble for the entryway and lounge, a massive aquarium for the study, and a nightclub for the basement.

In June 2019, the Manor sold for $119.7 million to an anonymous buyer, which was the highest sale in California's history at the time.

The longtime home of now-deceased Playboy magazine founder Hugh Hefner, the Playboy Mansion is among the most famous Los Angeles luxury properties. Designed in a Gothic and Tudor Revival style by architect Ron Dirsmith, the massive home exceeds 21,900 square feet. It contains over 30 rooms, including seven bedrooms, eight bathrooms, a wine cellar, a built-in pipe organ, and a home theater. The estate even has a stand-alone house reserved entirely for gaming and entertainment! Outside amenities include a tennis court, basketball court, zoo, aviary, and a swimming pool housed the famous (or infamous) grotto. It is one of the very few homes in Los Angeles with a zoo license or a permanent firework permit; in this case, the Playboy Mansion has both.

According to Playboy history, Hefner's then-girlfriend Barbi Benton discovered the 5.7-acre estate in 1971 and convinced him to buy it. Hefner paid $1.1 million for the property, which was the highest home sale in Los Angeles history at the time. In 2016, it was put on sale for $200 million and purchased by Hostess Brands co-owner and next-door neighbor Daren Metropoulos for $100 million. In 2018, Metropoulos and the City of Los Angeles entered into a Permanent Protection Covenant which protects the Playboy Mansion from demolition. The agreement is binding on all future owners as well.

Billionaire is a massive four-level home, consisting of 38,000 square feet of living space, with 12 bedrooms, of which there are two master suites and ten guest suites. There are 21 bathrooms, all adorned with 50 kinds of Italian marble, five bars, three dining areas, three kitchens, a wellness spa, a fitness center, a 4-lane bowling alley, and a show-stopping 360-inch television. Billionaire is also home to two alligator skin-lined commercial elevators, two wine cellars, as well as a polished steel staircase, and up to 130 works of art.

The mansion sits atop a 1.08-acre lot, with the exterior featuring a 17,000 square foot deck. Notable features include a retractable theater screen, an 85-ft glass tile infinity pool with a swim-up bar, and a helipad with an Airwolf replica. The home also looks out onto a splendid view of Los Angeles, the San Gabriel Mountains, and the Pacific Ocean off Malibu.

Looking to build near the Bel Air Country Club, Hilda Olsen Boldt Weber purchased the land in 1936 for $100,000. She immediately commissioned the construction of a home. Casa Encantada was designed by architect James Dolena and completed in 1937 for a sum that exceeded $2 million. Every piece of furniture, carpet, and fabric in the mansion was custom-designed by leading interior designer T.H. Robsjohn-Gibbings.

The 1930s Georgian-Grecian estate is perched on a mound, giving many of its 60 rooms breathtaking views of the Santa Monica Mountains, city lights, and the Pacific Ocean. The mansion has a card room, bars, and large living spaces. The grounds include a pool house, movie theatre, lighted tennis court, basketball court, swimming pool, greenhouses, and koi ponds.

Hotel mogul Conrad Hilton purchased the property, at a steep discount from the original project's cost, for $225,000 in November 1950. Mr. Hilton lived there until he died in 1979.

Casa Encantada was then sold to financier David H. Murdock in 1980 for $12.4 million, making the record for being the most expensive house sold in the United States at the time.

In 2000, the property sold for $94 million to its current owner, financier Gary Winnick, who also spent millions restoring it, enlisting architect Peter Marino's help to revive its classic detailing.

This massive Bel Air estate was listed on the market again for $225 million in October 2019.

The entire home also sits on rollers to protect it during earthquakes. Its 600-foot-long driveway ends in a motor court made entirely of recycled granite from Manhattan, recovered from the sewer system when the City of New York upgraded it.

Taking inspiration from the Palace of Versailles, the Fleur de Lys was commissioned in 1996 by its original owners David Saperstein and wife Suzanne Saperstein, and completed in 2002. Architect Richardson Robertson III, of Robertson Partners, was responsible for the design.

Upon the couple's divorce in 2004, Suzanne Saperstein received the property in the divorce settlement, and in 2006 placed it on the market for $125 million. After about six years in the market, the house sold in March 2014 to an anonymous Norwegian billionaire for $102 million in cash. 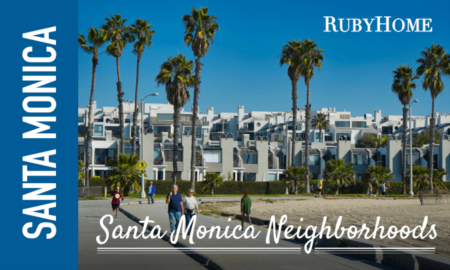 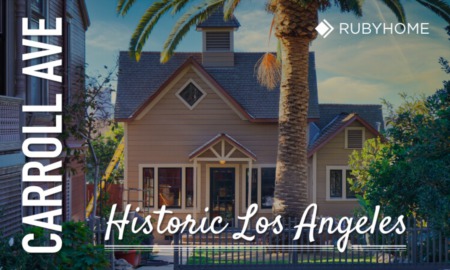