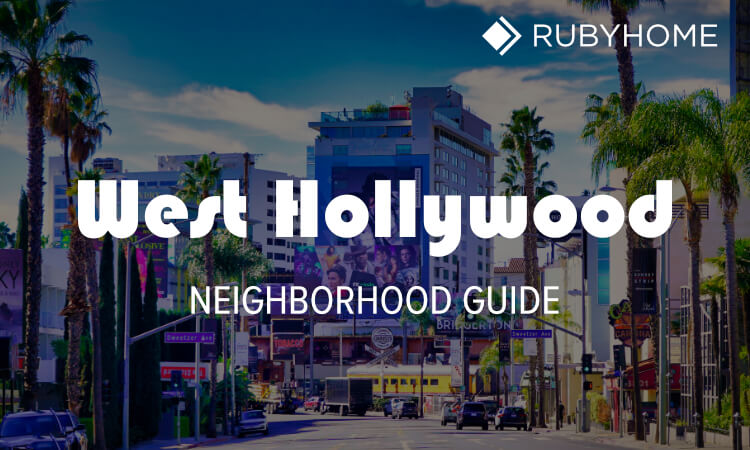 West Hollywood is known world-wide for being the home of the Sunset Strip and heartbeat of Southern California’s LGBT community. The city has plenty of nightlife, shopping, dining, and fun. Its central location -- bordering Beverly Hills, Hollywood Hills, and Hollywood -- makes it a hub of activity that draws many locals and tourists alike.

Of course, the amenities are plentiful. When you first move to West Hollywood, you may find it hard to unearth some of these community gems.

In the late 18th century, what would eventually become Sunset Boulevard started as a popular trade route between Downtown Los Angeles and ranches near the coast. It changed hands dozens of times over the years but eventually came into the hands of railroad tycoon Moses Hazeltine Sherman named the unincorporated area Sherman. In 1925, Sherman became West Hollywood. In 1936, the West Hollywood portion of Route 66 (Santa Monica Boulevard) was paved, which completed the transcontinental highway's western-most section, allowing uninterrupted car travel from Chicago to Santa Monica.

In the 1960s, people flocked to West Hollywood for its bohemian lifestyle and "hippie culture." In 1984, in response to a desire to maintain rent control, residents voted to incorporate. Today, the city separate police and fire services and its governance reflects the community's values.

WeHo has some of LA’s trendiest restaurants, along with many mainstays like Dan Tana’s (1964) and Jones Hollywood. Barney's Beanery, an iconic local hang out and sports bar, is dripping with local lore as many famous musicians and actors have frequented it over the years. Foodies will find many dining options from traditional steak houses, New American fare, tapas, sushi, to vegan Mexican!

Shopping ranges from small boutiques to large national chain stores. Here is a quick overview of retail areas in WeHo.

Sunset Plaza on the Sunset Strip

West Hollywood Gateway a small shopping complex on the eastern edge of West Hollywood where Santa Monica Boulevard meets La Brea Avenue. The block is less about trendy boutiques and more about pragmatic, everyday shopping and errands as one would do at its anchor tenants Target, Starbucks, and Best Buy. Along its northern boundary, several fast-casual restaurants line Santa Monica Boulevard. The nearby Trader Joe’s is also a big draw to the area.

Though technically not located within West Hollywood’s city limits, Melrose Avenue, Beverly Center, and The Grove deserve mention as they are so close and frequently visited.

Beverly Center abuts West Hollywood and is known for high-end boutique shopping and dining. Its anchor tenants include Bloomingdale’s and Macy’s.

The Grove sits just a few blocks south of the city and is a big draw for locals. The outdoor mall’s tenants include big brands like Nordstrom, Nike, Crate & Barrel, and Apple. The Original Farmers Market (1934) can also be found here. Open daily, the market has gourmet grocers and restaurants filling more than 100 vendor stalls.

Living in West Hollywood means you’re never far from fun. The area is legendary for its mix of restaurants and nightclubs, with many on Santa Monica and Sunset Boulevards, two of the city’s commercial drags.

The Sunset Strip buzzes with activity and Hollywood glamour. Whether it be enjoying a cocktail at a deck bar of one of its elegant hotels or attending a show at one of the iconic music venues, you are guaranteed a good time. The architecture and vibe are urban, with frequent high-rise condos and hotels, corner stores, and sleek surfaces. Walking down Sunset Strip at night, you're bathed in a neon glow of marquee lights and cars passing by. 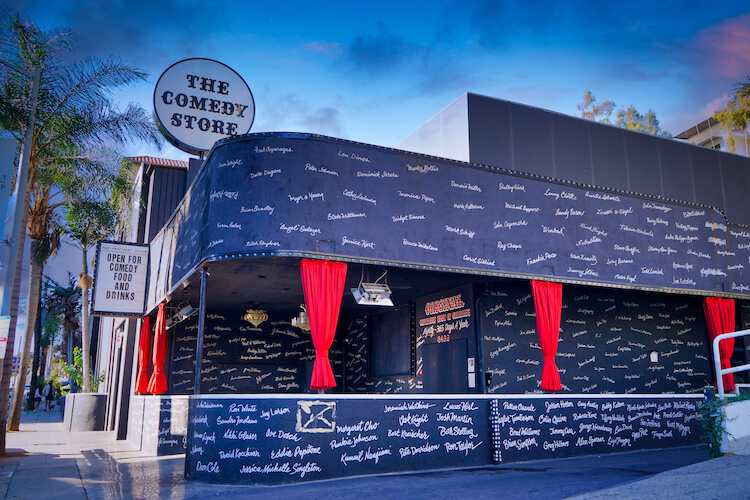 Locals and tourists take in shows at famous nightclubs like Whiskey A Go Go, The Roxy, and Viper Room. The Comedy Store and Laugh Factory make Sunset the de facto mecca of standup comedy in the Los Angeles area.

Hip hotels line both sides of the boulevard, brands like The Standard, Andaz, Mondrian, and Chateau Marmont (a timeless classic that continues to intrigue all who cross its threshold with its cozy, intimate setting). 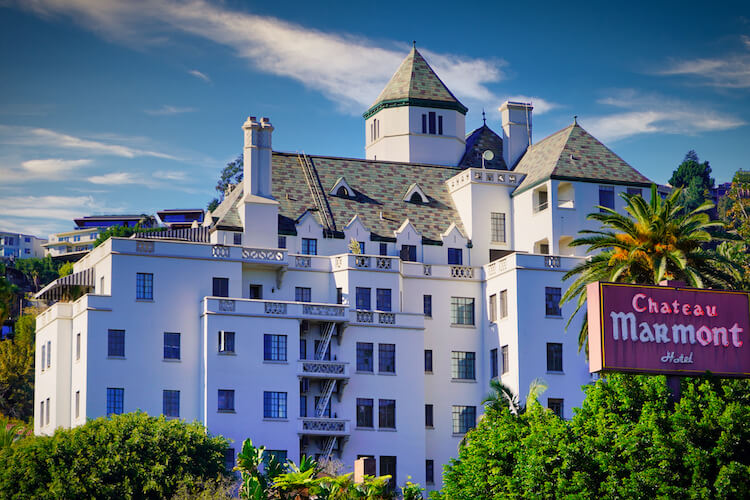 The AMC Dine-In Sunset 5 is WeHo’s go-to movie theater with a full-service menu and comfy seats. For a more extensive selection of screenings, Pacific Theaters at the Grove is just minutes away.

Near Doheny Drive and Sunset Boulevard sits The Troubadour (1957), where many great musical artists launched their careers. It is still one of the best venues in town to catch an intimate show, whether from an up-and-coming band or 'super artist’ looking to play a small venue.

The boulevard's central portion is ground zero for the gay nightlife scene with iconic nightclubs like The Abbey and Rage.

Halloween revelers flock to West Hollywood’s Carnival, packing Santa Monica Boulevard each October 31st. The event is the biggest Halloween party in the world. Some sources peg attendance at 500,000!

Carnaval and the marathon are the two significant annual events that jam the area; both are highly celebrated despite the inconvenient traffic congestion each creates.

Plummer Park is super clean with manicured greens and tables. The park is a perfect place for a picnic. It also has a playground, a recreation center, and a designated parking lot. Pet-friendly, the park even provides waste bags if you've forgotten yours. Seven tennis courts are available to reserve by the hour. Make sure to call the pro shop ahead of time, though, as slots will fill up. Every Monday, you can visit the Helen Albert Certified Farmers' Market from 9 am-2 pm at the north parking lot (1200 N Vista Street).

Kings Road Park is one of West Hollywood's hidden gems. This small pocket park tucked away and provides a shaded spot to relax and take a break from the city's hubbub. It even has a waterfall! 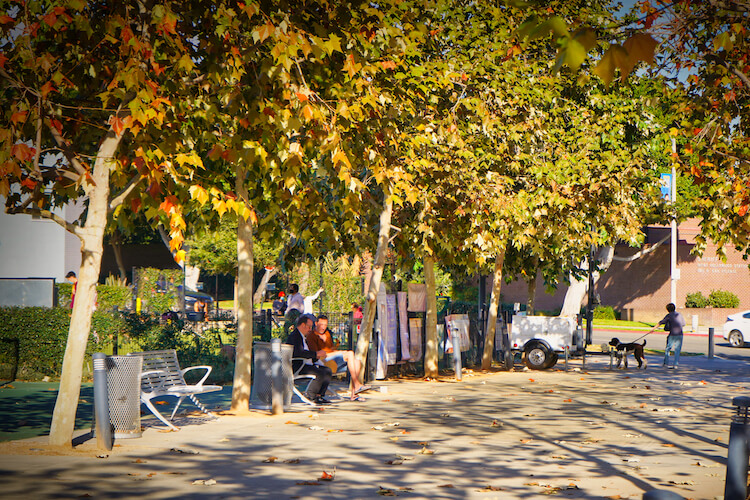 Runyon Canyon Park sits just north of West Hollywood. This massive park is 130-acres and has entrances at the bottom of the ravine via Fuller Avenue or Vista Street. The top is accessible just off Mulholland Drive. Its breathtaking panoramic view of the LA Basin and hiking trails draws a daily crowd, so finding a parking space can be tricky.

West Hollywood Public Library is open daily with free Wi-Fi and validated parking, the West Hollywood Public Library is great for everyone, but particularly handy for working professionals and students. It is large, so seating is open and ample. Conference rooms are available to reserve. You can enjoy a view of the Pacific Design Center along the east facade. The library also offers several unique programs and engaging seminars.

West Hollywood has a subtropical-semi-arid climate, like the rest of Los Angeles County. One of the reasons people move to West Hollywood is for the warm year-round weather and sunshine, just like all of Southern California.

Precipitation is infrequent, so don't expect snow here; none has been recorded since 1949. In fact, this is part of a warming trend. The weather in Los Angeles is six degrees warmer on average than in the early and mid 20th century when many West Hollywood homes were built. Thus, upgraded and rehabbed homes typically include forced air heating and cooling systems to improve one's comfort level in the hot summer months.

Be sure to check out West Hollywood condos and homes. 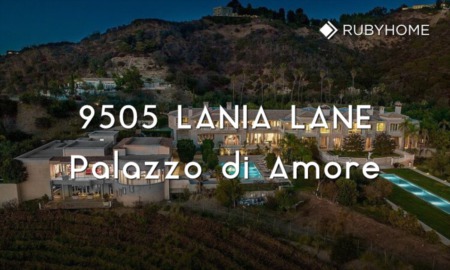 Article Updated Saturday, January 16, 2021 The Property At the end of a quarter-mile private driveway sits a mansion named ...