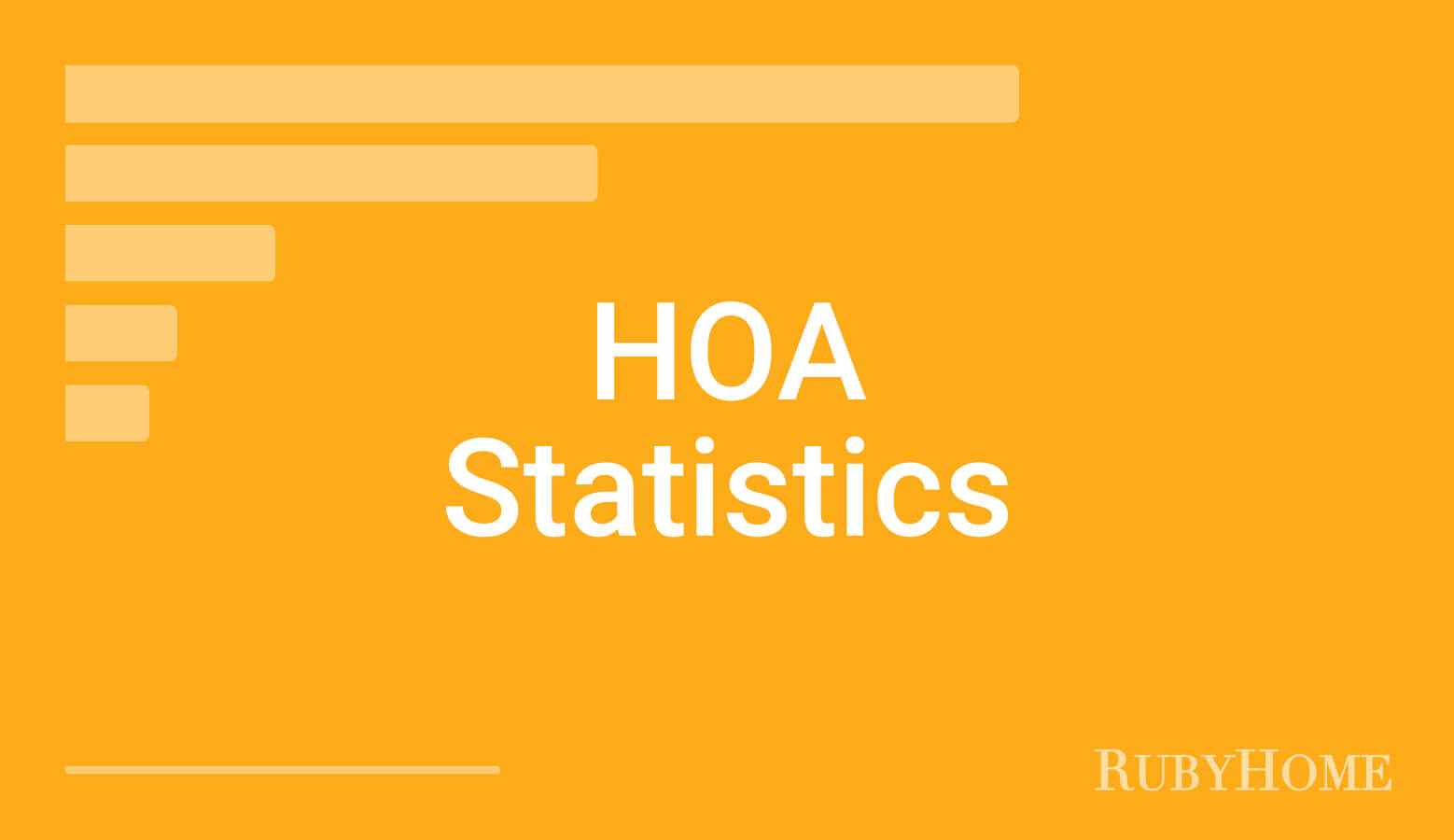 A homeowner’s association (HOA) is an organization that makes and enforces rules for a group of residents in a subdivision, community, or residential building. HOAs collect fees (or dues) from their members to pay for the maintenance of common areas and the upkeep of facilities.

In this article, we’ll look at how popular HOAs are, the average cost of living in an HOA, and more:

In real estate, the term homeowner's association is used regardless of whether the membership comprises residents who own single-family homes or condominiums. 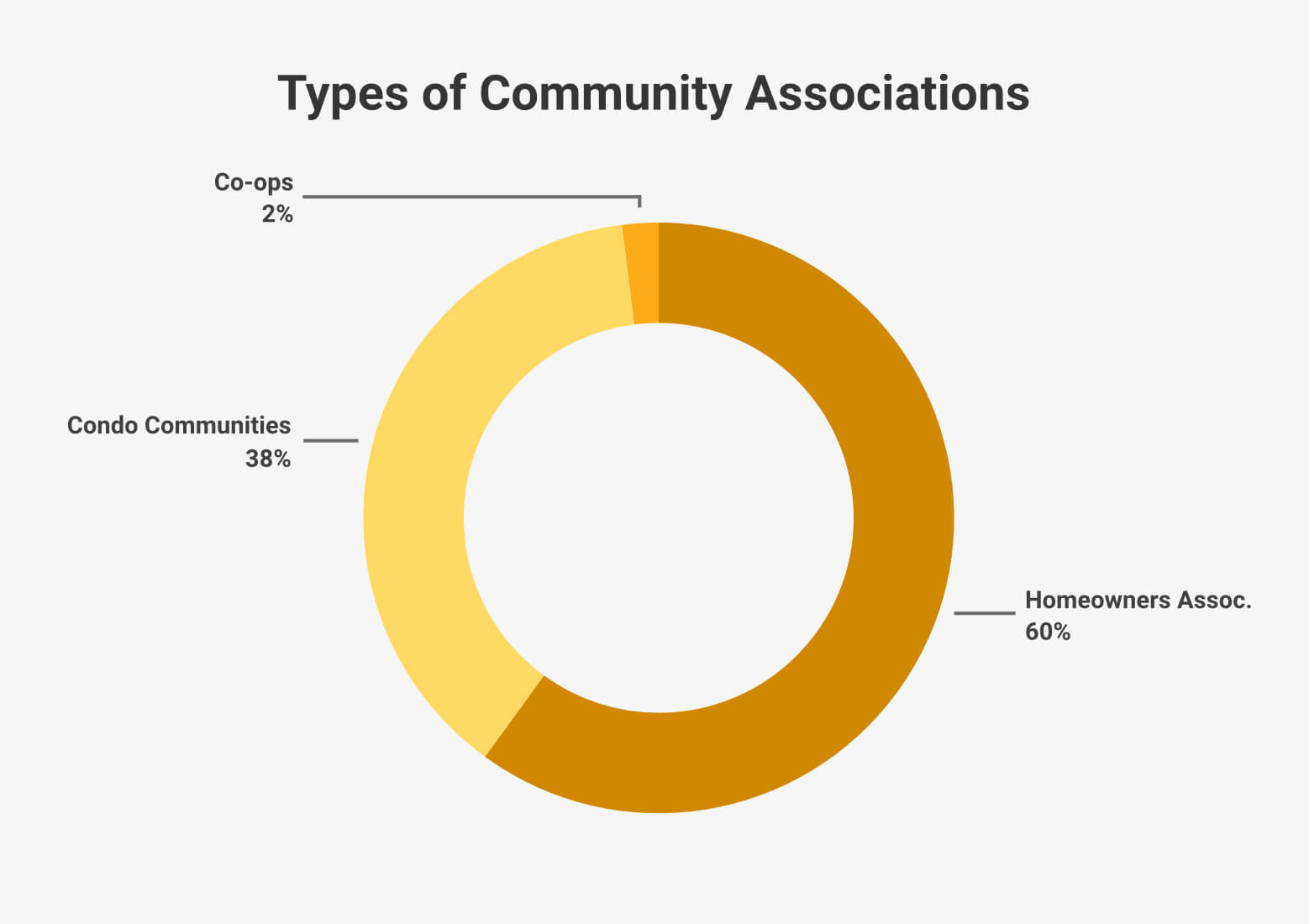 Here is a breakout of the percentage of residential property types by association types:

Co-ops operate differently than standard condo HOAs. In a co-op, the building is owned by a corporation. Rather than traditional ownership, residents own shares in the corporation and have the right to occupy their units.

Legal structure aside, co-op owners pay a maintenance fee for the upkeep of the building and shared spaces, just like homeowners in other types of community associations.

How Many People Live in HOAs?

Below you can see the total number of associations in the US over time which includes standard HOAs, condominium communities, and co-ops: 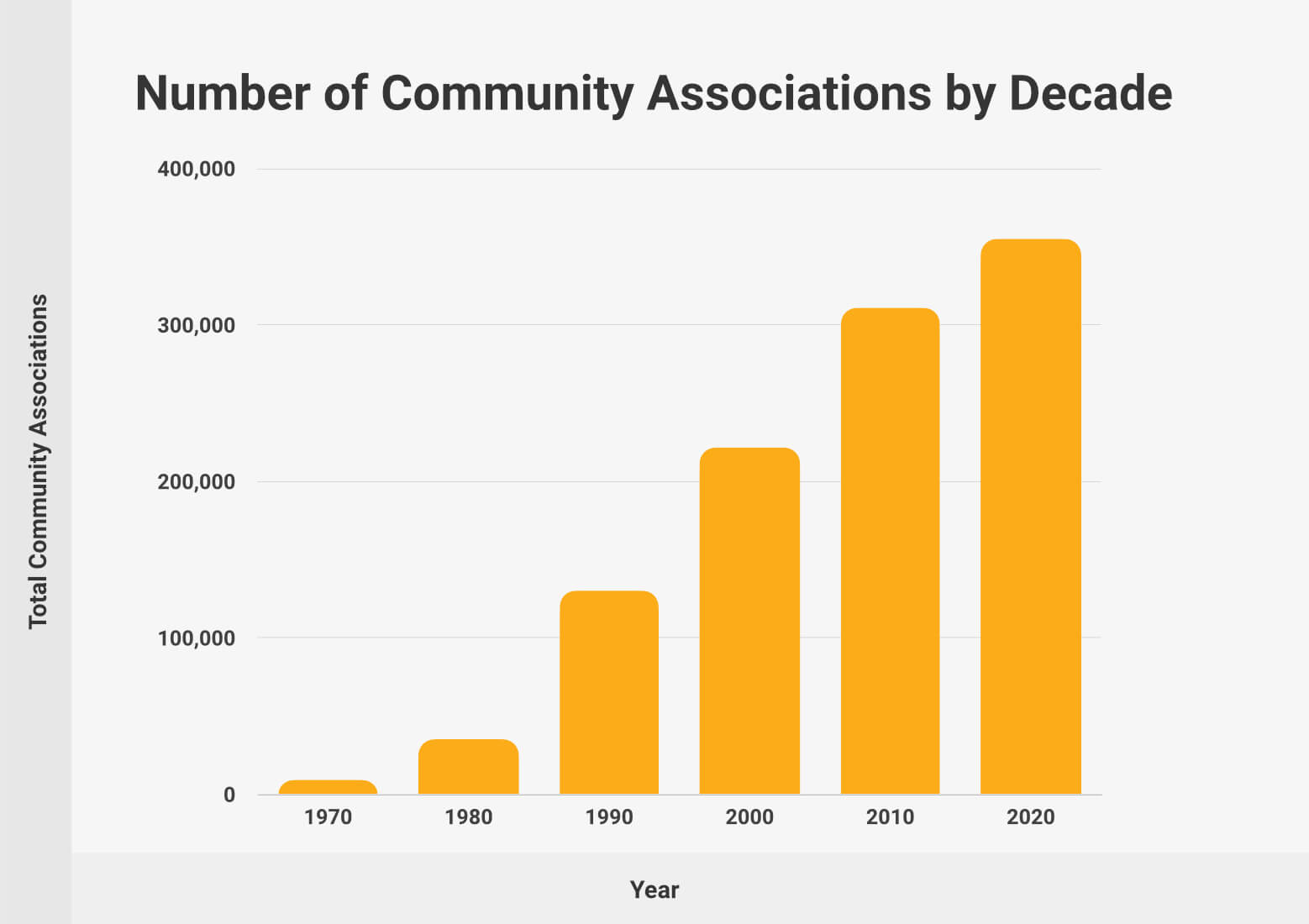 Here is a table showing the total number of HOAs:

Number of People Living in HOAs 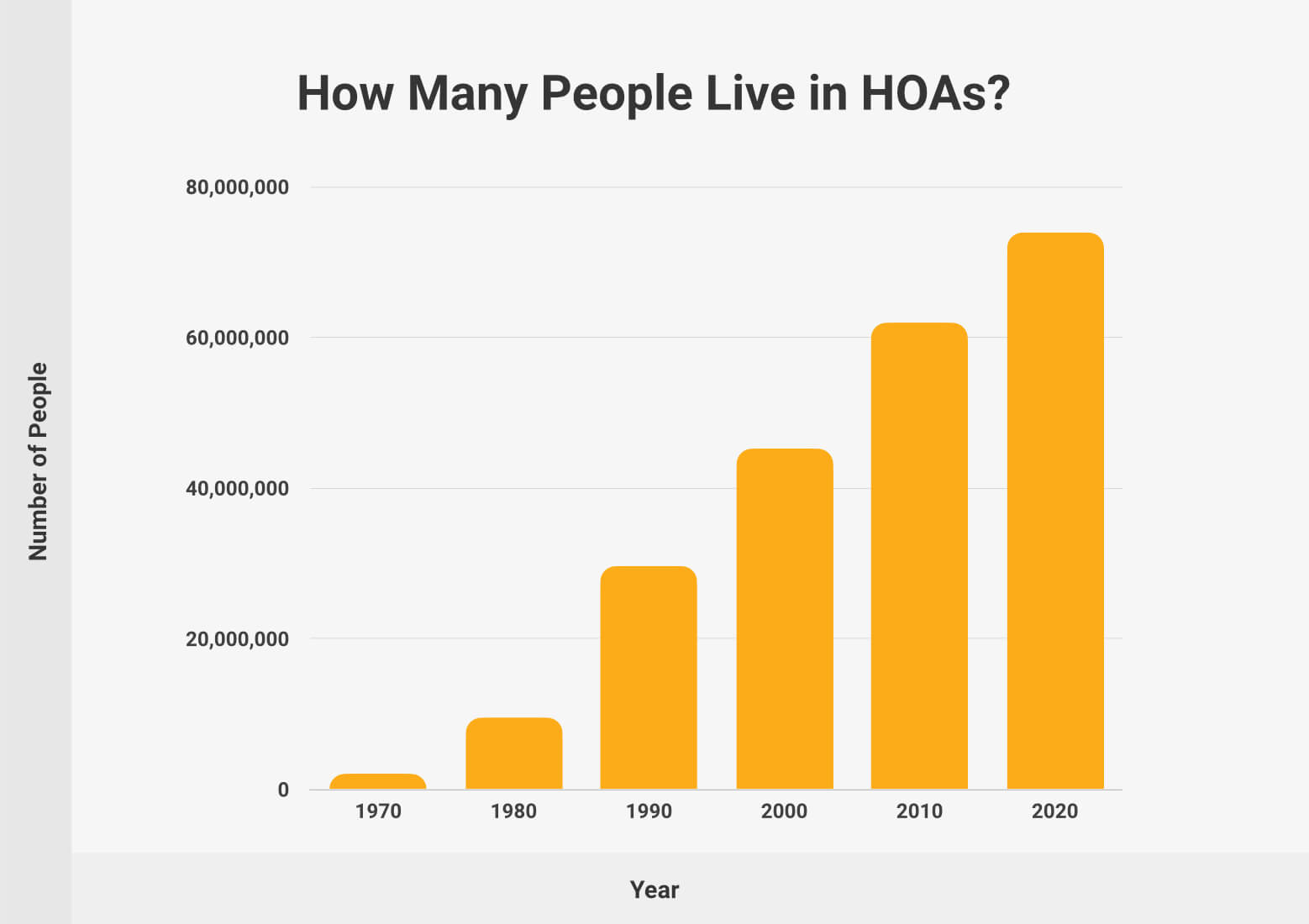 Here is a table showing the number of people living in HOAs since 1970: 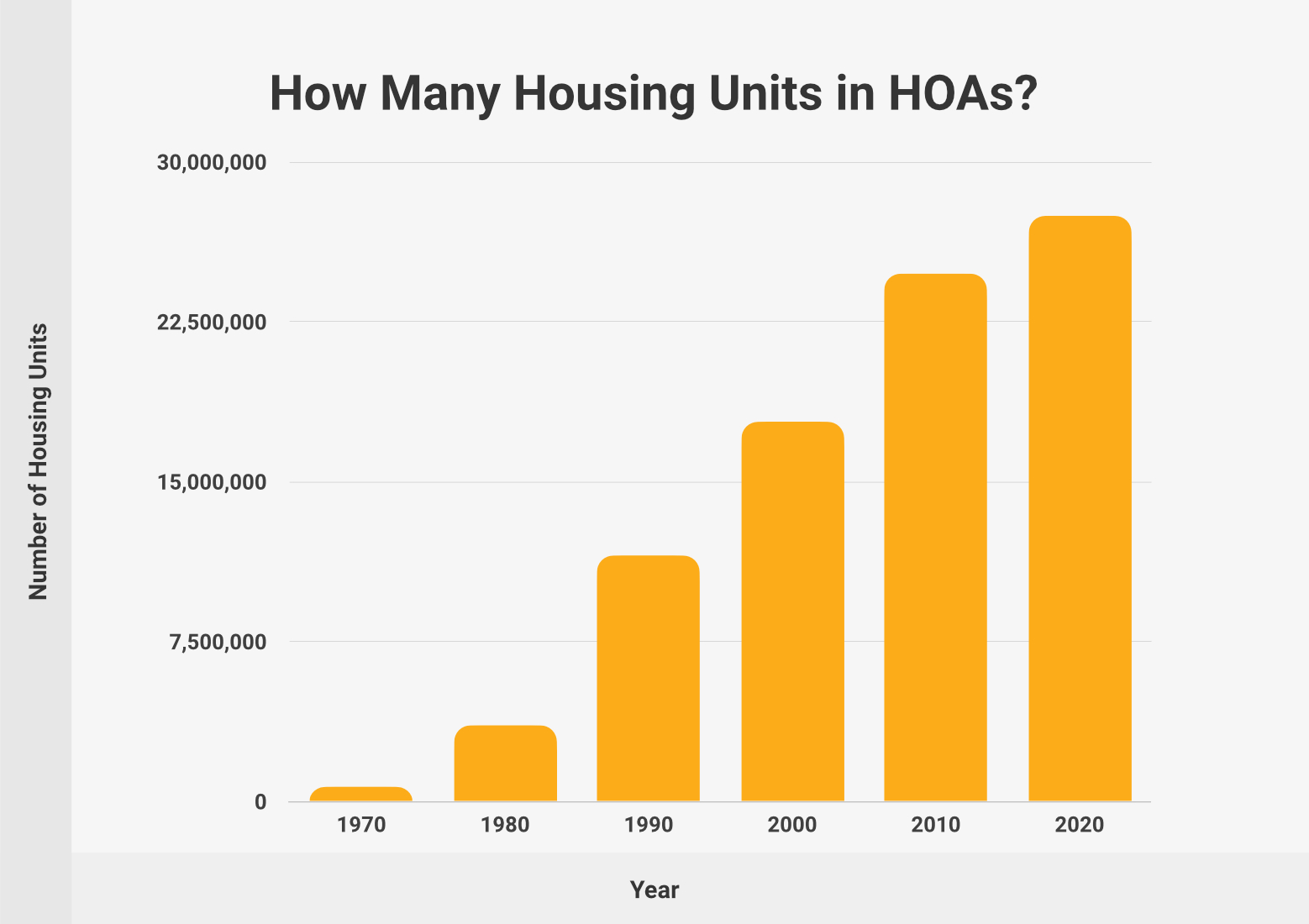 Here is a table showing the total number of housing units in HOAs: 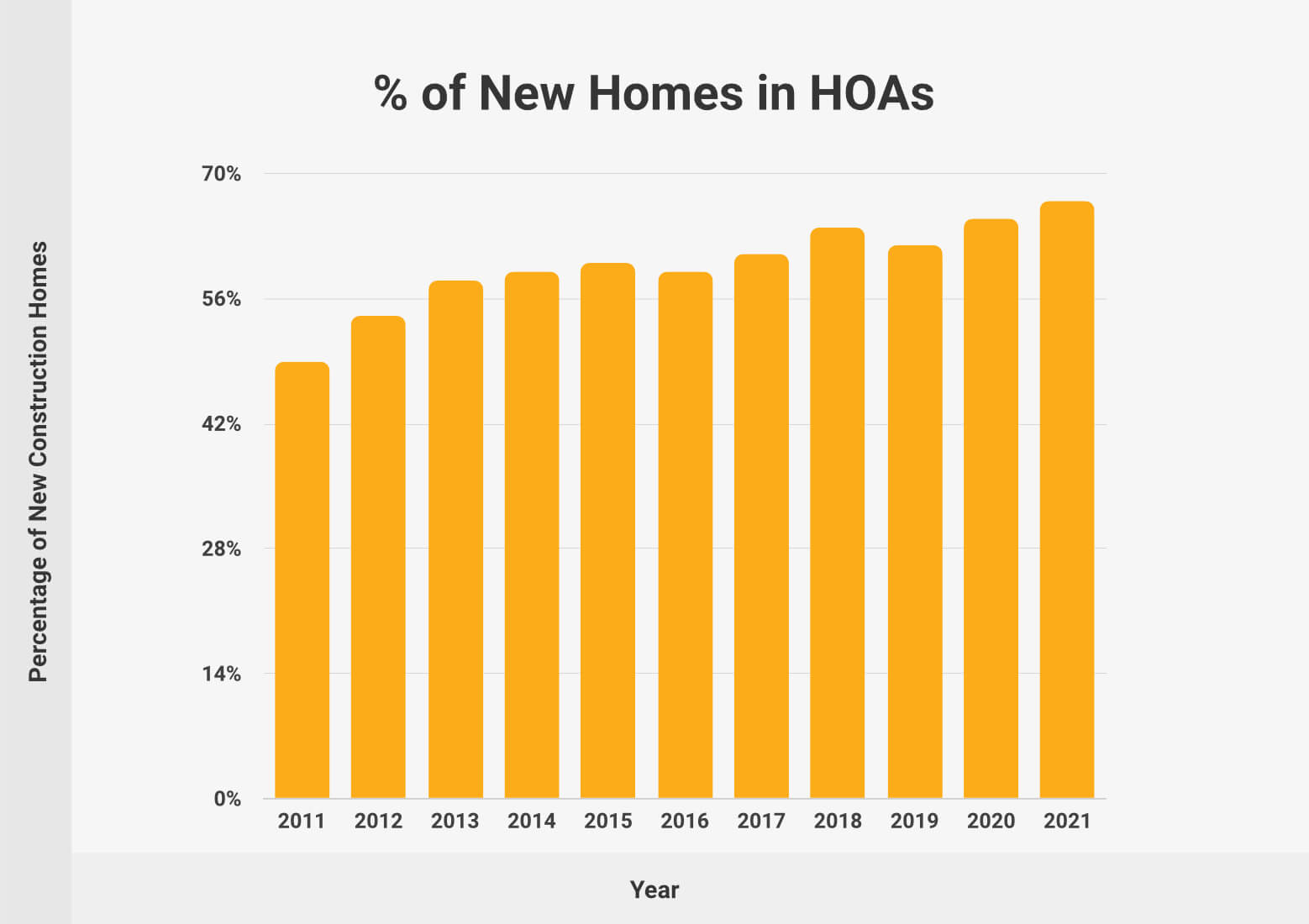 Here is a breakdown of total number of new construction housing units with HOAs:

New homes that are a part of a homeowner association are growing fastest in the southern and western United States. 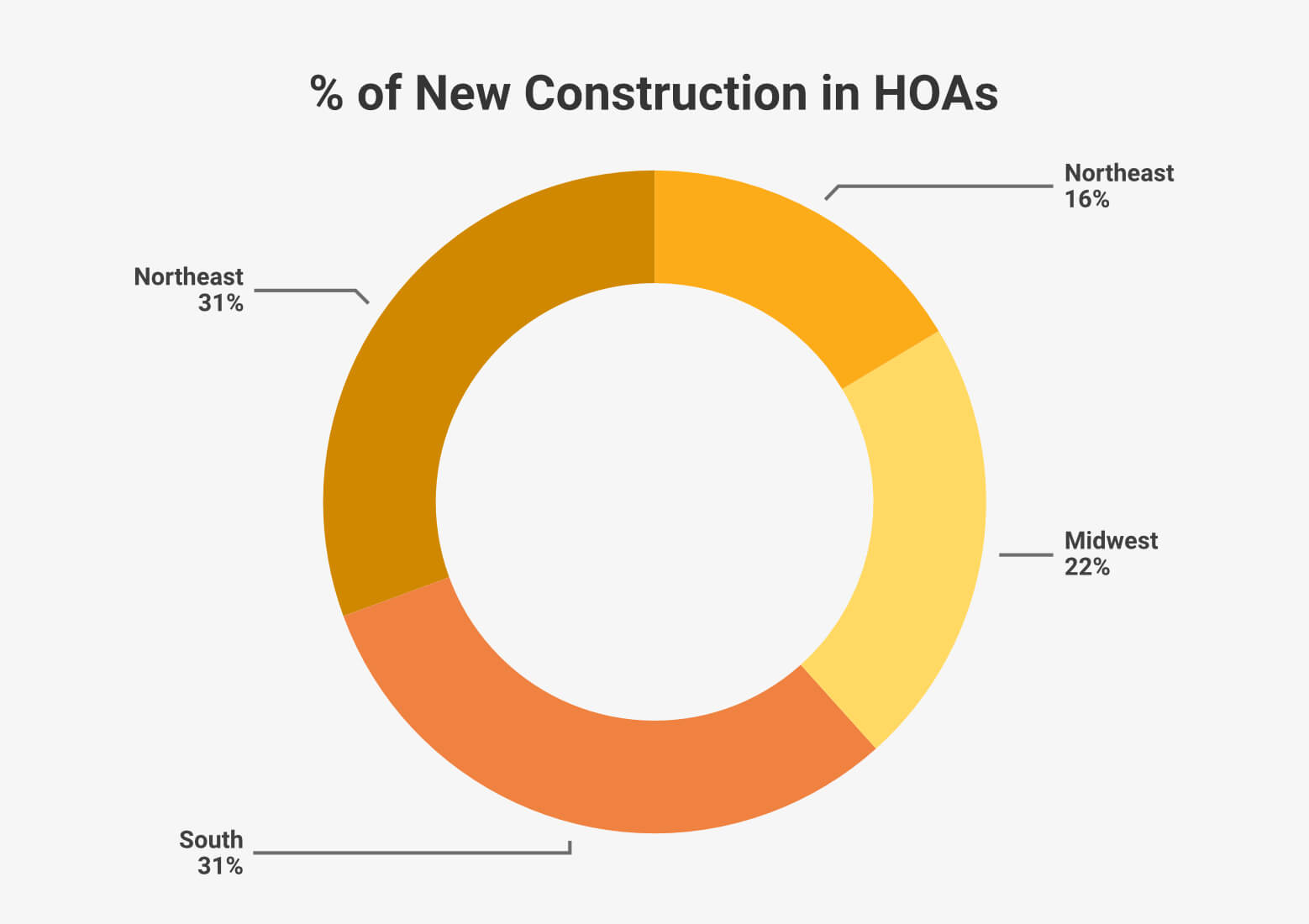 Here is a table showing the homeowners associations, by region, for new construction homes:

The following list shows the percentage of each state's total population that lives in an HOA:

While most residents enjoy the amenities and being part of an association, one potential downside is the cost. Monthly fees depend on the neighborhood or building’s location and the extent and nature of the amenities offered.

Let's look at regional differences among some of the top cities in the United States. 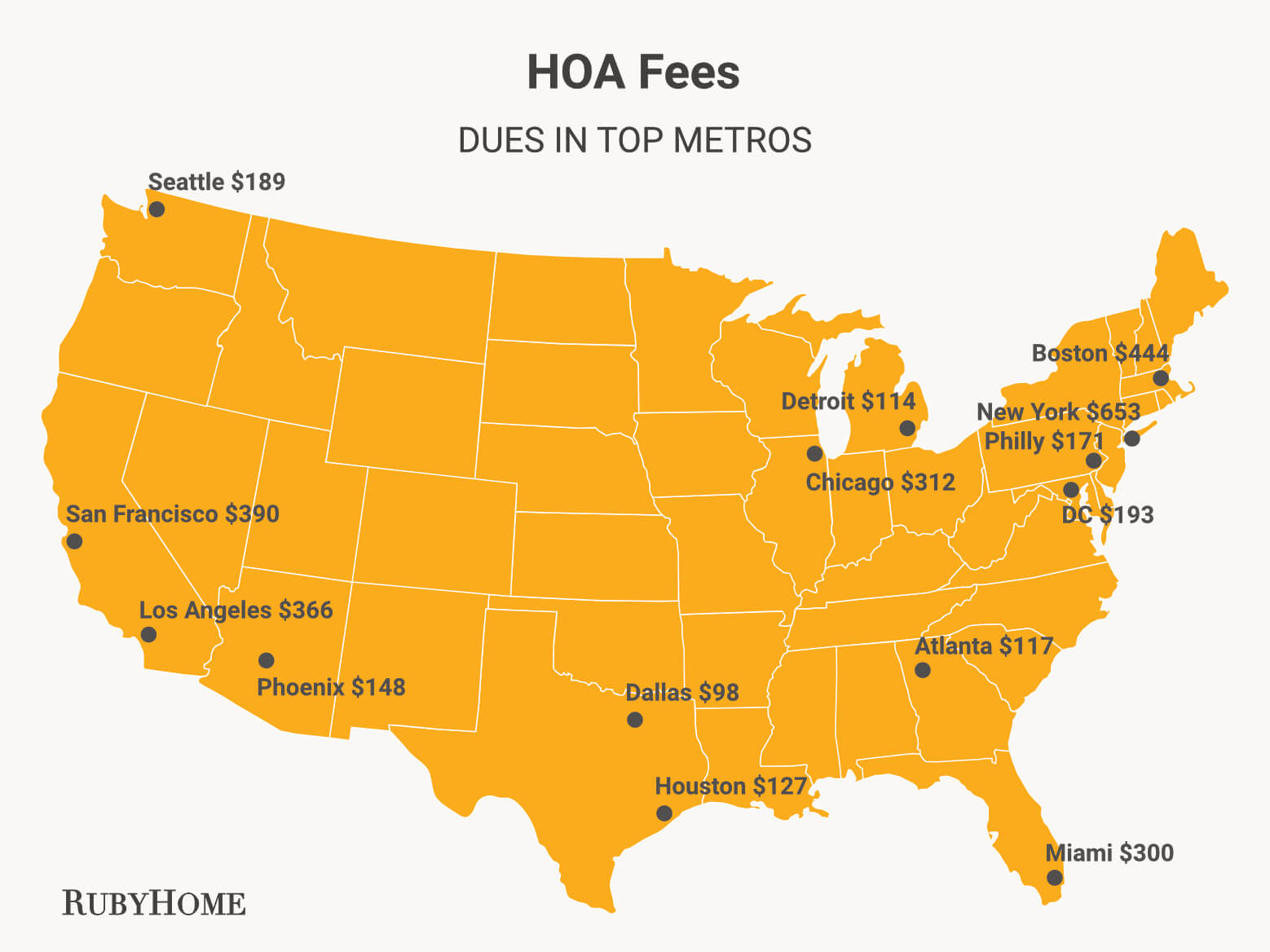 Here are the mean monthly HOA fees for the metro areas:

Unsurprisingly, the New York and San Francisco metro areas had the highest monthly association fees. The two markets consistently rank as some of the most expensive to purchase real estate in the United States. In expensive cities, it's common to pay over $400/month.

In addition to location, the type of community association can impact the fees. For example, condo associations often have higher dues because they typically offer more amenities like fitness centers, concierges, valets, etc. Here's how average single-family home and condo association fees stack up across the US:

Keep in mind these are general estimates from a small sample size of communities across the country. Fees can range from as little as $50/month to over $1000/month.

As HOAs have risen in popularity over the years, it begs the question, what advantages are there for homeowners who choose to live in an HOA community? Here are five of the most common benefits:

Having a well-maintained home in a well-kept neighborhood is attractive to buyers. With HOA residents held accountable for maintaining their properties and common areas, property values stay more consistent. According to a study at George Mason University:

Having a community that takes care of landscaping, garbage collection, and more can ease the challenges associated with home ownership. Living in a well-maintained neighborhood is aesthetically better and more effortless in which to live.

HOAs can offer a real sense of togetherness, and some organize community gatherings and activities. Many members enjoy the increased opportunities to socialize or be a part of something bigger.

While HOAs offer many benefits, they may not be perfect for everyone. Here are some of the most common drawbacks of living in an HOA:

Guidelines and Standards Can Be Restrictive

Some homeowners may not like restrictions on the types of vehicles they can park in their driveway, what colors they can paint their home, or the types of trees or bushes they can have in their front yard. For those who don't like being told what to do, HOAs may feel restrictive. Remember that guidelines vary depending on the community; some are stricter than others.

HOA Fees Can Be Expensive

One should consider the extra cost of HOA fees and determine if the services provided are worth it. When residents were asked how the felt about the value they received versus the cost:

Of course, some may feel they are paying too much.

The HOA May Not Be Well-Run

Not all HOAs are adequately managed. One potential downside is being part of a homeowners association where a few members refuse to pay fees, or the HOA has problems enforcing the rules.

That's our summary and key statistics for HOAs in 2022. With now more than 1 in 4 Americans living in an HOA, it’s clear that they have grown massively over the past 50 years. In addition, based on construction trends, the popularity of HOAs is set to continue to expand into the future. 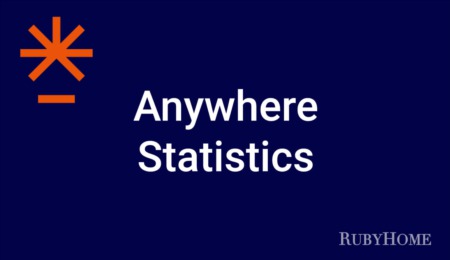 Compass is a full-service real estate brokerage incorporated in 2012 under the name Urban Compass. The company later ...