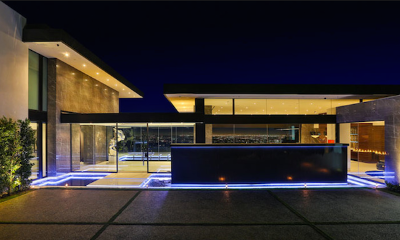 Trousdale Estates is a community within the City of Beverly Hills, carved out of the hillside from what was once the Doheny Ranch. Most of the homes within the development were built during the 1960s and feature mid-century modern homes sited on terraced lots. Trousdale Estates real estate consists of a high concentration of homes designed by notable architects and led to the neighborhood's reputation as an enclave for mid-century modern chic.

Other architectural styles are represented within the neighborhood, ranging from the more traditional to ultra-modern glass jewel boxes. The community is home to many high-profile residents, who value the privacy afforded by lush landscaping, gated lots, and a private security firm with armed guards patrolling the neighborhood around the clock.

Trousdale Estates is located in the 90210 zip code and is bordered by the Bird Streets, Doheny Estates, and Laurel Canyon neighborhoods of the Hollywood Hills to the east; Beverly Crest to the north and west; and Beverly Hills to the south. Entrances to Trousdale Estates are found at the intersections of Doheny Road and Loma Vista Drive, Doheny Road and Hillcrest Road, Schuyler Road and Carla Ridge, Cherokee Lane and Loma Vista Drive, and on Alto Cedro Drive.

When Lucy Doheny decided to relocate to a newly-built nearby mansion called "The Knoll" at 1130 Schuyler Road, she sold off pieces of her family estate (including Greystone Mansion). In 1955, Paul Trousdale, who was once Bank of America's biggest home construction client, purchased 410 acres of land, where orange groves once grew on the Doheny ranch, for $6 million. Trousdale spent another $400,000 in fees to get the City of Beverly Hills annex the land, which increased the value of the land and satisfied a condition of the sale. At this point, he began parceling off the land and grading it into 535 lots, the development financed in part with $6.7 million of pension money from the Teamsters. 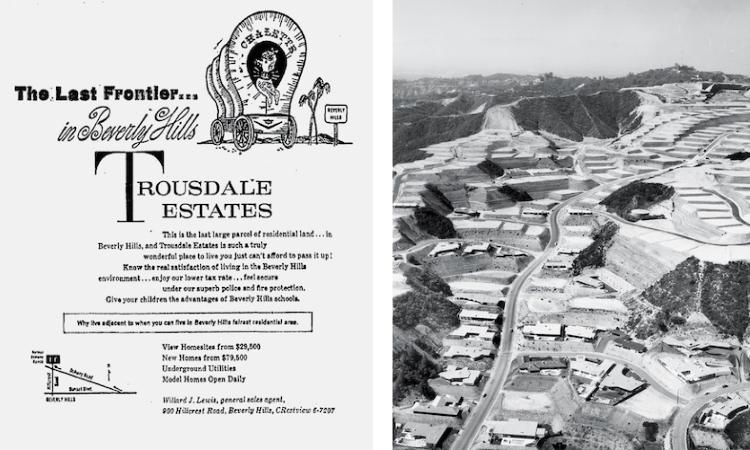 Print ads for Trousdale Estates touted "A life above it all." The opportunity to build on a flat pad within a new hillside development in the most desirable city in the country drew celebrities and socialites, as they jockeyed for the best lots and commissioned the best architects and interior designers. Groucho Marx was one of the first to buy in Trousdale Estates and he quickly commissioned Wallace Neff to build a low-lying modern home. Most of the homes were built in the 1960s and many were designed in the modernist style. Many noted architects of the time built in the neighborhood with Lloyd Wright; Richard Neutra; A. Quincy Jones; Wallace Neff; Harold Levitt; Buff, Straub & Hensman; Richard Dorman; John Elgin Woolf; Paul Williams; James Dolena; William Sutherland Beckett; Cliff May; Robert F. Skinner; George MacLean; Rex Lotery; and Lundberg, Armet & Davis all represented.

At one point in the 1960's, with sales slower than desired and grading on the western edge of the development nearing completion, the marketing team launched a campaign centered around a plan for ten model homes, two homes each by architects A. Quincy Jones, Edward Fickett, Richard Dorman, William Stephenson, and Rex Lotery. Only five of the ten were ever built.

An Architectural Committee established standards for homes built within the Trousdale Estates neighborhood with the intention of maintaining views, consistency, and privacy within the community. Among other restrictions, covenants required 3000 square foot minimums and dictated single-story construction where views might be obstructed. The code was strictly enforced; one instance concerned a roof that had to be removed because it had been built two inches higher than permitted. While Allen Siple served as supervising architect of the design review board, architect Ed Fickett was a personal friend of Paul Trousdale and had influence on the initial development of houses in this area. The Architectural Committee was disbanded once the original homes were constructed.

For a short amount of time, Richard Nixon lived in a home sold to him at a "celebrity discount" after he lost his first bid for president and returned to Los Angeles in 1961. The resulting story of how much he paid for his home drew national interest. Of particular irony is the development being partially funded by Nixon's nemeses, the Teamsters.

After a rash of renovations, additions, and new construction altered the neighborhood aesthetic and blatantly obstructed the views of neighbors, the Trousdale Estates Homeowners Association and the City of Beverly Hills enacted the Trousdale Ordinance to preserve the neighborhood's character and value. As a result, building height is being strictly enforced to preserve views and review periods have been lengthened and a committee was formed to nominate landmark status, with homes by certain architects automatically protected from demolition. Mills Act tax credits are available within the neighborhood due to its historic significance.

Among the architects to build estates within Trousdale in recent years are Marmol-Radziner, Howard Backen, and Steven Shortridge.